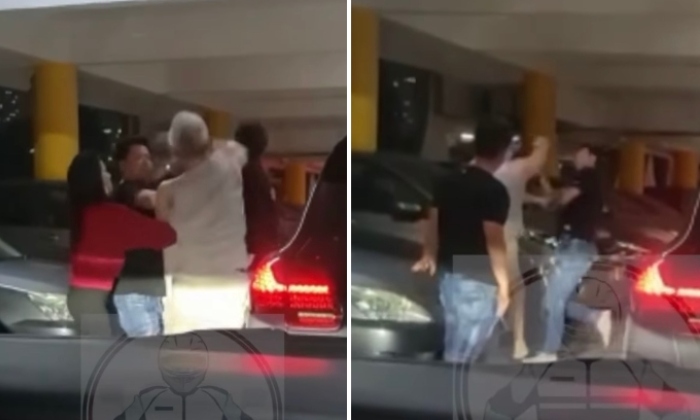 In a Singaporean version of the Ultimate Fighting Championship (UFC), a burly man takes down three of his opponents in a dramatic fight that broke out at Golden Mile carpark on Wednesday (Nov 11).

A video of the fight was posted on SG Road Vigilante's Facebook page and has since gone viral with over 500 comments and 4,000 shares.

According to the video, the fight occurred at 10.30pm.

In the pre-fight entertainment, a man wearing a black shirt can be seen approaching the man in grey and shouting 'lai'.

The wrestling match then begins when the man in grey pushes his opponent away, with the latter retaliating in an attempt to rain blows on him.

The camera pans away for a second, but returns to the fight scene to show three men on the ground, with the man in grey towering above them.

A man in black gets up, attempts to go for round two and smacks his opponent, but ends up getting punched in the face.

The other two men are visibly scared and can be seen backing away, possibly wanting to concede defeat.

But the man in grey continues to dominate and pushes one of the opponents in his chest, and he instantly falls to the ground.

The man then walks towards his last opponent standing, but spares him after a woman in red stands in the middle of both men.

Throughout the entire altercation, the first guy in black can still be seen lying on the ground.

Netizens have left their thoughts about the dispute in the comments section of the video, and most have agreed that the man is grey is truly the Ultimate Fighting Champion.

And one particular netizen was inspired by the man's victory.