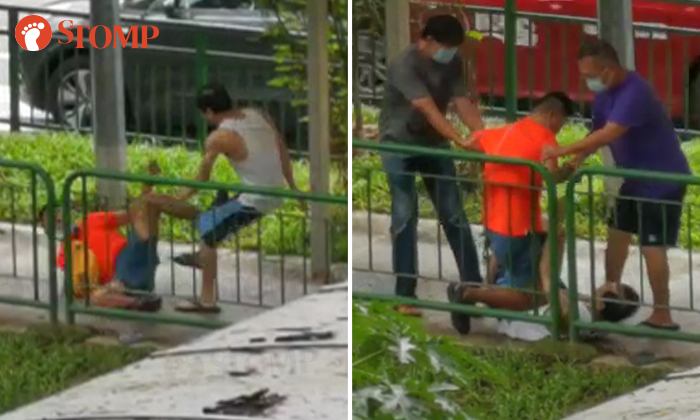 Two men had a bad start to their week by getting into a fight in Jalan Bukit Merah on Monday morning (Nov 9).

Stomper Anon witnessed the incident that occurred in front of Block 131 Jalan Bukit Merah at around 9.45am and took a video.

Anon said: "I heard shouting but wasn't sure what was going on or why the men were fighting."

In the video, a man in a white top can be seen repeatedly kicking a man in an orange shirt while a third guy watches the scene.

The man in orange is seen trying to get up from the ground but to no avail.

At one point, the man in white delivers another kick at his opponent, only to slip and fall.

Both men then continue tussling and holding each other in a headlock.

The man in orange eventually pins the other man onto the ground before being pulled off by two others.

Anon told Stomp: "Towards the end of the video, some guys came to break up the fight and the men went their separate ways, and the police were not notified."

Related Stories
Men smack and rain blows on each other near Bedok 85 hawker centre, police investigating
Man taken to hospital after being "beaten up" outside Serangoon Road restaurant
Man rains blows on guy -- who runs away from him
More About:
fight
dispute