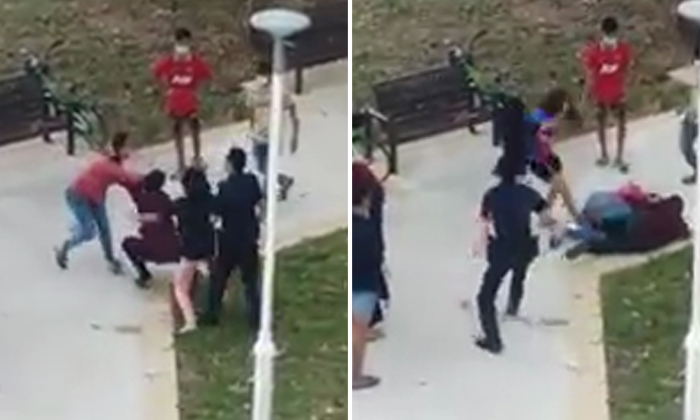 Three women were arrested after an argument involving 11 people escalated into a physical altercation in Marine Terrace on Tuesday (Oct 20), while three others are under investigation.

A video of the scuffle, titled 'Royal Rumble 2020', was posted on Facebook and has been shared over 3,500 times.

In response to a Stomp query, the police said they were alerted to a group of people arguing in the vicinity of Block 13 Marine Terrace at about 1.45pm.

"The first pair of police officers arrived at the scene and observed that a heated dispute had occurred between two groups of people, involving a total of 11 persons," they added.

"Members of one group were seen approaching the other group in an aggressive manner and one officer took a member of the first group aside to engage separately."

The other officer attempted to calm and separate the rest.

However, some members of both groups subsequently broke into a scuffle despite repeated advice and intervention by the officer.

Three women, aged between 32 and 55, were arrested for affray at the scene.

The offence of affray under Section 267A of the Penal Code carries a jail term of up to one year and/or a fine of up to $5,000.

Two female teenagers, aged 14 and 15, and a 38-year-old man are also under investigation.

According to the police, preliminary investigations revealed that the two female teenagers are known to each other.

The other members of the respective groups are their family members and friend.

The dispute had initially arose due to offensive remarks exchanged between members of both groups the day before on October 19.

They also said that they do not condone acts of violence which may cause harm to others, adding: "Offenders will be dealt with in accordance with the law. Members of the public are advised to heed the instruction of police officers and not take the law into their own hands."

Related Stories
Man taken to hospital after being "beaten up" outside Serangoon Road restaurant
Man rains blows on guy -- who runs away from him
Men in 'drunken' fight at Upper Serangoon View
More About:
dispute
fight
argument
arrest
Youths behaving badly