Man swings stick around and uses it to 'draw' on car in Yishun, police investigating 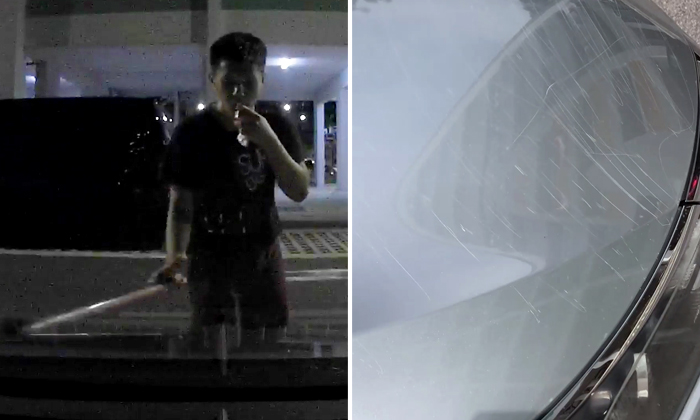 Police are investigating an incident in which a man was caught on camera vandalising a car that was parked at an open-air carpark in Yishun.

Facebook user Swampy Wilson, the owner of the car, said the incident occurred at Block 302 Yishun Central on Saturday (Aug 1), between 4am to 5.05am.

According to Wilson, the man was first seen sitting on the road at around 4am. He then appeared to be "chasing after a cyclist" at 4.37am and "stalking a man from behind" at 4.43am.

Wilson, a resident at Block 302, said the man "started his art on my front bonnet" at 5am.

Videos that Wilson posted show a man wielding a stick-like object and swinging it around.

The man, who was smoking and did not have a mask on, can then be seen using the stick to scratch Wilson's car non-stop.

Another video accompanying the Facebook post also shows the multiple and extensive scratches on the front bonnet of Wilson's car.

When contacted by Stomp, Wilson said that he was "very upset and shocked" when he came across the damage on his vehicle at around 9am that day.

He added: "I felt really lost. I went for a coffee to think about what to do next."

Wilson, who made a police report on the same day, is appealing for anyone who knows the man to come forward with information.

He told Stomp: "I do not recognise the man at all."