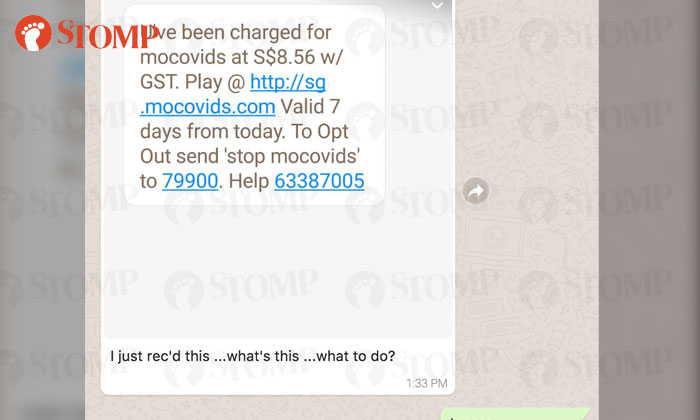 Stomper Julian was shocked when he realised he had been paying $20 to $30 per month for a service he had not knowingly subscribed to.

The Stomper had visited an M1 Shop at Change Alley on Thursday (Sep 27) to recontract his parents' phone lines.

He was informed about the charges by the customer service officer who was helping him check his account.

"I found out I had been paying $20 to $30 per month for this subscription called MocoVids for my dad's line since June," he told Stomp in a phone interview.

According to its Facebook page, MocoVids is a subscription-based entertainment platform that offers "high-quality curated video from all over the Internet with no ads, no bufferings".

Julian then remembered his father had forwarded him a message he had received previously, telling him he had been charged $8.56 for MocoVids. 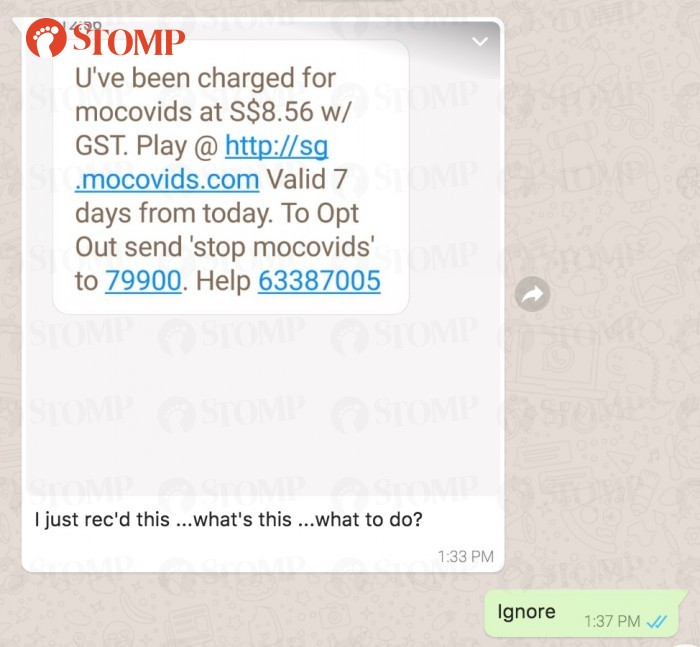 "At the time, I told him to ignore the message but looking back at it, I realised that the message said to text the number to opt out of the service instead of opting in," Julian said.

"However, I was told by the customer service officer that I shouldn't reply these messages either, so it's a bit confusing how to handle these things.

"I think that this is unfair especially when these subscriptions are targetted at people like my parents who are less tech-savvy."

The Stomper said that he did not realise he had been paying more than usual because he pays his phone bills via GIRO.

Fortunately, the M1 staff helped him activate the Premium Rate Services (PRS) barring service so that his parents would no longer receive these messages.

They also refunded him the subscription fees he had been paying for so far.

"I am grateful to the M1 staff for alerting me to this and helping me activate this service," Julian said.

In response to a Stomp media query, an M1 spokesman said that all third-party content providers need to comply with the Code of Practice under PRS.

"Services offered by third party content providers will only be activated when customers respond to the offers," the spokesman said.

"At M1, we have processes in place to safeguard unethical third party content providers' billing to customers.

"We will not hesitate to take appropriate action against errant PRS providers.

Related Stories
Man shocked after getting text saying he'll be charged $10.70 weekly for service he didn't subscribe to
Man surprised to find over $1,000 deducted from bank account for iTunes transactions he never made
Facebook scam exposed: Ex-colleague whose account was hacked claims he got $110,000 "for free"
More About:
scam
text
M1