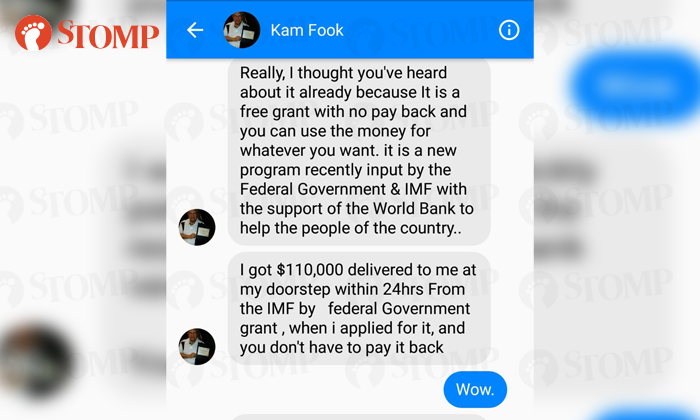 A new scam making its rounds on Facebook messenger claims to offer $110,000 "for free" if you apply for a grant.

Stomper Robert brought this scam to our attention, sending in screenshots of a conversation he had with the scammer on Facebook messenger.

However, this wasn't simply a case of a random online user who attempted to scam him. It was Robert's ex-colleague, Kam Fook Wan, whose Facebook account was later found to have been hacked.

In the screenshots that he sent, the scammer starts off by not-so-subtly bringing up a program related to the International Monetary Fund (IMF) and said, "It is a free grant with no payback and you can use the money for whatever purposes you want."

He then asked the Stomper to apply for the supposed grant, to which the Stomper replied, "How?"

The scammer then told Robert, "I apply through one of their official agent that helped me in my grant."

Sensing something was amiss, he asked the scammer, "To verify your identity, which process team are you from?"

When Robert had worked with Fook Wan, they were on the same team together and hence if he really was Fook Wan, he would have been able to tell him.

However, "Fook Wan" did not reply to his message.

He then called Fook Wan on the phone and found out that his ex-colleague's Facebook account had been hacked.

When he shared his experience with some friends in his chat group, they told him that they too have also been contacted about the exact same scam, claiming to offer $110,000 "for free".

"I hope that people can be more careful," added Robert.

Related Stories
Scam email claims to be from IRAS, offers tax refund and wants your credit card details
Received an SMS claiming to be from UOB? It could be a phishing website
Stomper 'orders' 3,000 iPhones from seller who offered 'buy 2 get 1 free' promo
More About:
scam