Man surprised to find over $1,000 deducted from bank account for iTunes transactions he never made 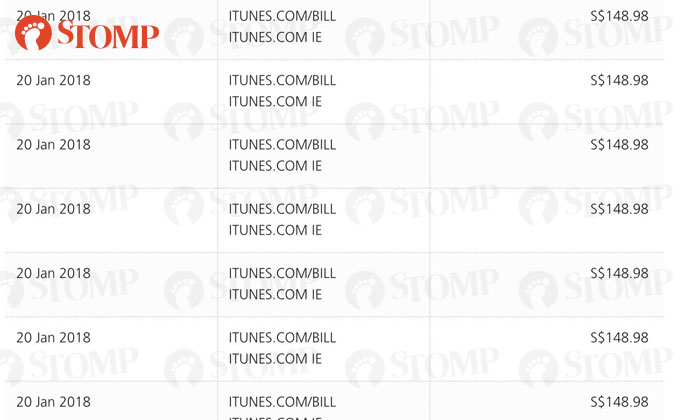 Stomper Alvan was shocked when he discovered that he had been charged over $1,000 for a number of iTunes transactions he had never even made.

He noticed something was wrong when he saw he had only $100 left in his bank account after making a transfer.

"I generally don't keep too much money in this particular account but this was really low," said the Stomper.

He then went to check his transaction history and was surprised to find several transactions made by iTunes.com with the amount totalling to $1071.84.

All transactions were made on Jan 20.

"I don't use iTunes and I have never linked my bank card number to my Apple account," said Alvan.

"These transactions were all charged to my debit card so the money was deducted directly from my savings account."

As soon as he saw what happened he contacted his bank, DBS, and reported the situation.

"They immediately cancelled my card and are sending over a new one," he said.

"It's a bit of a hassle but it's the safest move."

Alvan told Stomp that the bank will return him the money that has already been deducted after they are done conducting their investigations.

"I just want to warn other people about this because I was never even notified," said the Stomper.

"I can imagine people getting a rude shock once they receive their bills."

Stomp has reached out to DBS for more information.

Related Stories
Facebook scam exposed: Ex-colleague whose account was hacked claims he got $110,000 "for free"
Received an SMS claiming to be from UOB? It could be a phishing website
Man loses $5,600 to scammers running fake Singapore Police Force website
More About:
scam
money
bank