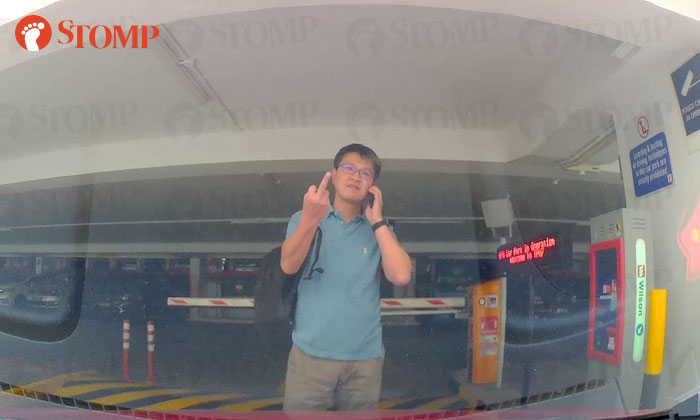 A man was caught on video pointing his middle finger, spewing vulgarities and blocking a driver's way after he was honked at in a multi-storey carpark at Toa Payoh.

Stomper Mark was driving into the carpark at Block 120A Lorong 2 Toa Payoh on Friday evening (Sep 6) when he encountered the man.

In a video Mark shared with Stomp, the man in a blue T-shirt is seen talking on his phone while walking in the middle of the road near the entrance of the carpark.

"I sounded my horn at him to let him know I was behind and also for him to be more careful in the future," said the Stomper.

"He took his own sweet time and was still talking on his mobile phone.

"Then the ultimate thing happened... he blocked my car's path and showed us his middle finger.

"My young son was sitting beside me."

"I pointed to the camera in my car and he turned away, still walking in the middle of the carpark pathway.

"Of course I had to honk at him again to warn him which drew his wrath again and out came his middle finger and vulgarities from his mouth.

Marc added that he hopes that man will be more mindful of traffic around him in the future.