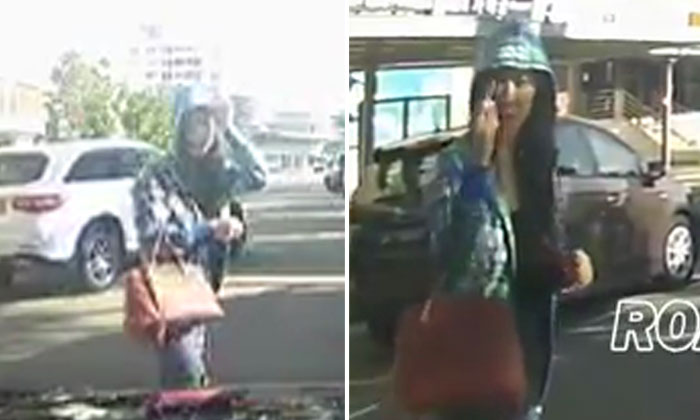 A Mercedes-Benz driver was caught on video flashing the middle finger twice at another motorist after cutting in front of him and attempting to block him so that she could park in a lot he was waiting for.

The video of the incident was posted on ROADS.sg's Facebook page.

According to the timestamp, this happened on Saturday (Nov 24) at about 4.44pm. However, the location is unclear.

In the video, the driver recording the footage with his in-car camera is waiting for a white BMW to exit a parking lot by the side of the road.

A white Mercedes-Benz with licence plate number SLK8699G  then pulls up from his left and stops in front of him before a woman wearing a hoodie exits the driver's side of the car.

Her male companion gets into the driver's seat while she walks over to the BMW driver to check if he is leaving.

She then stands in front of and blocks the other motorist who was waiting for the parking lot to free up.

According to the post, the driver with the car cam said he was waiting with his signal lights blinking.

After the other driver sounds his horn at her, she comes over to his side before walking in front again and pointing at the lot.

When the guy responds, "Ya!" she shows the middle finger at him twice before walking back to her car.

Needless to say, netizens have slammed her behaviour with some saying she has "no class".