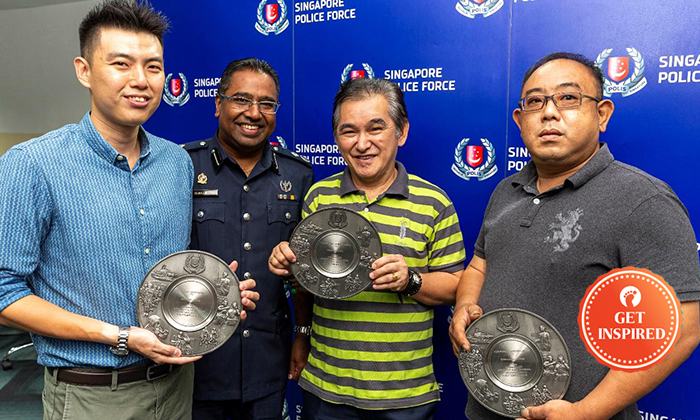 In a ceremony held at Jurong Police Division on Thursday (Sep 5), three members of the public were commended for their public spiritedness in assisting the police in three separate cases.

In the first case, Mr Goh Keng Heong had prevented a lady from committing suicide along the corridor of Block 510 Jelapang Road on May 14.

Mr Goh had spotted a woman leaning over the ledge in an attempt to commit suicide. He reacted swiftly and managed to pull her to safety. His timely intervention helped save a life.

In the second case on June 29, Mr Ong Koon Tee was at the void deck of Block 438 Choa Chu Kang Avenue 4 when he heard a woman shouting for help.

Mr Ong noticed a man running from the victim and decided to follow the man to his home. He then provided the information to the police, resulting in a swift arrest of the man for outrage of modesty.

For the third case, which occurred on Aug 2, Mr Ang Yaocheng was at 1 Jurong West Central 2 when he heard the alarm from a retail shop being sounded.

Mr Ang spotted a man running from the shop and decided to give chase. He managed to detain the man who was subsequently arrested for shop theft.

Assistant Commissioner of Police (AC) Devrajan Bala, Commander of Jurong Police Division said, “It is indeed heartening to see the strong partnership between the police and the community.

"The strong sense of civic-mindedness and courage displayed by these exemplary citizens have helped to save a life in one of the cases and in the others, helped police to nab the suspects swiftly thereby bringing a quick resolution to the incidents.

"Their actions are a good example for others and a testament to the strong sense of partnership between the Police and the community."