Father-daughter duo nabs upskirt suspect who pleaded: ‘I have wife and daughter at home' 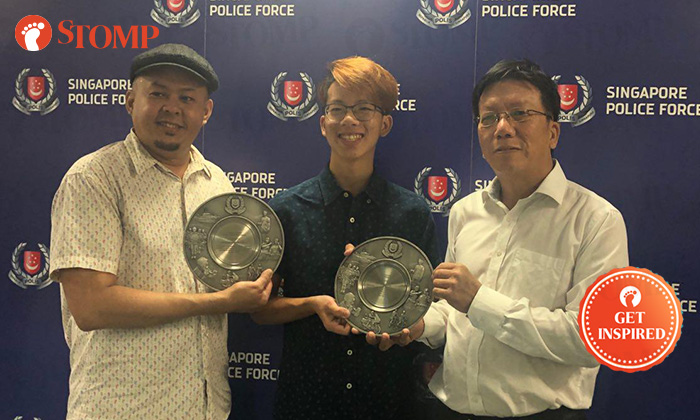 In a ceremony held at Clementi Police Division on Friday (Aug 23), three members of the public were commended for their public spiritedness in assisting the police in two separate cases.

In the first case on Jun 23, 59-year-old Mr Loo King Keong and his daughter, 24-year-old Ms Alethea Luo Jiayi, were walking down the stairs of an overhead bridge near 154 West Coast Road when they noticed a man holding a mobile phone underneath the skirt of a woman.

The accused and the victim were travelling on an adjacent escalator that was moving upwards.

In the interview, Mr Loo said: "It happened around 11am. The guy looked to be in his 40s. I noticed him acting very peculiar. He was holding his phone at a very low angle.

"I confronted him and shouted: 'What are you doing!' The guy quickly retracted his phone and walked past the victim. My daughter and I went up the stairs and caught up with him but the guy said: 'No, I did nothing wrong.'

"The pervert was busy deleting while walking. By the time we caught up, he bravely surrendered his phone.

"My daughter looked at the 'Recently Deleted' folder and found that he tried deleting the photos taken.

"After that, we asked him to wait and we called the police after. He panicked and pleaded but we told him we have to wait. He said things like: 'Please forgive me. I got a daughter and a wife at home.'

"The victim, who is about 30 years old, was angry and in shock.

He said: "Good that my dad and sister did something so the man can’t do the same thing in future."

In the second case on May 23, Mr Mohamed Juhairi Bin Juma’at saw a man standing on a stool near a parapet at Block 58 Lengkok Bahru.

During an interview, Mr Juhairi, who has been residing in a fifth-floor unit at the same block for five years, said that he was unlocking his house gate at about 5.30pm after returning from work when he noticed an elderly man, looking to be in his 70s.

He said: "I walked down to my flat from the lift. I first saw the man with one leg on a stool and one leg on the floor. As I was unlocking the gate, I turned my head and saw half of the man's body on the parapet.

"I think if I didn't manage to pull him back in the next three to five seconds, he would've jumped down.

"At the same moment, while he was trying to jump, I heard sirens. The man was feeling lost and scared then he quickly ran down but an officer downstairs managed to catch him. An officer asked me how come the man's here, but I said: 'I don't know, I don't even recognise him.'

Mr Juhairi found out from an officer later on that the man lives in an eighth-floor unit of the same block.

He said: "I just wanted to save the man."

When Stomp asked what his family thought about his act, Mr Juhairi answered: "They said: 'Wa you hero ah.' I told them small matter only. It’s not a big fuss. I only shared this with my close friends. I didn't want it to go viral.

"For me, it’s a simple, tiny thing. Like helping an aunty to carry groceries."

Assistant Commissioner of Police (AC) Jarrod Pereira, Commander of Clementi Police Division said, “Singapore is one of the safest places in the world and the community plays a big part in making this possible. These individuals have acted courageously, and their actions have resulted in a safer community for all.”