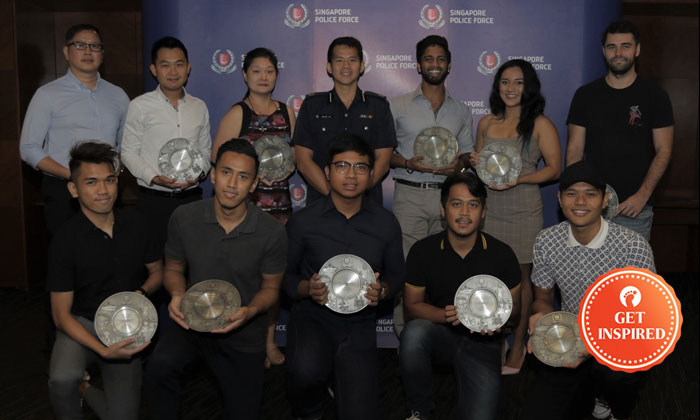 In the first case, that happened on Nov 29, 2018, Mr Koh Kheng Boon was at a store at Chinatown Point when he noticed a man using his mobile phone to take upskirt photos of a woman.

He detained the 21-year-old man until the police arrived.

The second case occurred on Dec 1, 2018 at a bus stop outside Clarke Quay MRT Station.

Mdm Soong Yeo Leng Irene was there when she was a man trying to steal the handphone of a drunk victim.

She took a photo of the man and subsequently reported the case to the police.

With her assistance, the police established the identity of the man and arrested him on four days later on Dec 5.

They immediately chased after the 24-year-old man and detained him until the police arrived.

The fourth case happened on Jan 21 at Raffles Place MRT Station when Mr Tan Chin Kwang Shawn was on an escalator and noticed a man placing his mobile phone underneath the dress of a woman.

Mr Tan detained the 29-year-old man until the police arrived.

In the last case, that happened on Feb 2, Miss Rifaransi Hodjatzadeh, Mr Kunwar Sidhant Singh and Mr Grant Smith McLeod were at Kallang Road when they heard a man shouting for help and saw him struggling over a bag with another man.

The trio immediately chased after the 23-year-old man and detained him until the police arrived.

"We are thankful for these 11 individuals' strong sense of civic-mindedness and concern for public safety.

"Their actions allowed us to apprehend five subjects for different offences.

"In three of the cases, it was the keen eye and healthy suspicion of three individuals who spotted a crime taking place which could have very well gone unnoticed.

"Nine of these individuals even put themselves at risk of harm by stepping forward to help apprehend the culprits.

"Their actions are a good example for others and a testament to the strong sense of partnership between the Police and the community."