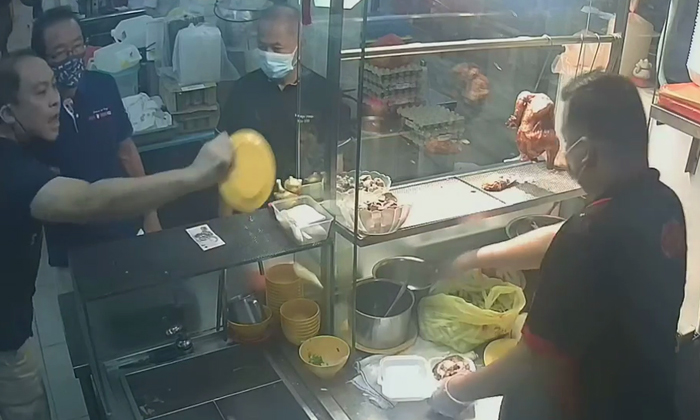 A customer was caught on camera throwing a fit during a dispute with a chicken rice stall vendor at a coffee shop in Bedok.

Hong Shi Chicken Rice posted a video of the incident that occurred at its Block 56 New Upper Changi Road outlet on Wednesday evening (May 5), at around 6.40pm.

In the audioless video, a man can be seen getting increasingly agitated while arguing with an employee at the chicken rice stall.

The man is then seen picking up a tray and smashing it onto the ground.

He subsequently picks up a plate of chicken from the stall counter and throws the meat at the employee, before also tossing the plate at him and walking off.

According to the stall, the customer had ordered a plate of chicken rice for $8. He returned to the stall after 10 to 15 minutes and requested for an additional serving of chicken for $2.

However, the stall vendor said the minimum order for extra chicken was $3, which apparently upset the customer.

According to the stall vendor, he informed the customer that "it would be fine" if the customer had asked for the $2 worth of chicken when he bought the plate of chicken rice.

In a police report that was lodged on Wednesday night, the stall vendor said he then prepared the additional $3 worth of chicken.

He stated: "(The customer) told me that if he could not finish the food, I will have to eat it. I then said I am not an animal and I do not want to eat leftovers.

"He started hurling vulgarities at me and scolding my mother. He then proceeded to throw the plate of chicken at me and left."

Many netizens slammed the customer's rude behaviour, with some praising the stall vendor for keeping his cool.

Several users also said both parties were at fault and that while the man was wrong for throwing things, the stall could have also been more flexible.