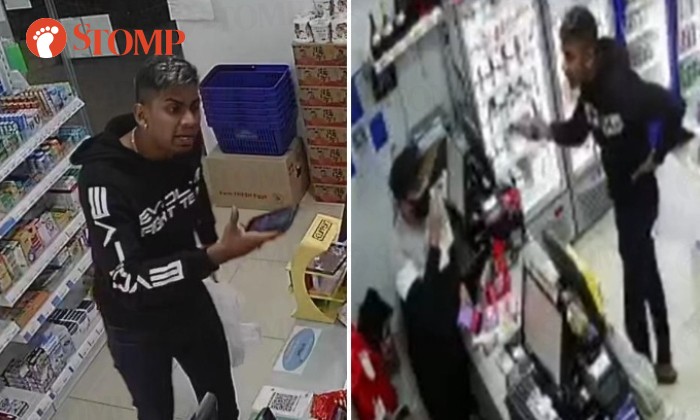 A man who was not wearing a mask caused a scene at Angel Supermart on Sunday (Jan 3) after his request to exchange two bottles of alcohol for another brand of liquor was denied.

The incident took place at the outlet at 37 Miltonia Close, which is located in the premises of Skies Miltonia condominium, at about 4.30am.

A video of what happened was uploaded to Angel Supermart's Facebook page, after Daniel, who is the boss of the store, felt frustrated at how his employee was being treated.

Daniel told Stomp that the customer came in during the wee hours of the night to exchange his bottles of alcohol for another brand of liquor.

However, Daniel explained that such exchanges cannot be done, especially since the items are bottles of liqour and the sale of alcohol is prohibited after 10.30pm.

When the employee tried to explain the situation to the customer, the latter got agitated and did not hold back on the insults.

In the video, a man in a black jacket can be seen shouting and gesturing at the store employee.

The man continued yelling that the items "are the same price already", and insisted for the exchange to be done.

The employee can be seen speaking on the phone while the customer continues to shout.

In the end, the customer storms out of the store, but not before hurling insults and vulgarities at the employee.

"In the Facebook post, I said it was a Foodpanda order. But after I made some checks, I realised it was not. It was just a customer who wanted to exchange his alcohol for a different brand," Daniel told Stomp.

"Does he know that telling my employee not to remind him about his mask because he is Singaporean does not make my employee immune to the virus? He could feel the spittle on his face! That's why he had to physically turn away from the counter.

"And I can't believe he used curse words on someone who is just following instructions. How can he threaten and harass him like this?

"Verbal insults like these are common, but this guy took it too far. Such incidents actually cause my team to be very demoralised, making them reluctant to work during the night shifts.

"I also want to highlight that my employee handled the situation to the best of his ability, and exactly in line with the company's standard of procedure.

"If the customer wanted to shout, he should have shouted at me, not my employees. My name card is available at the store, just take it and shout at me. But do not abuse my employees."