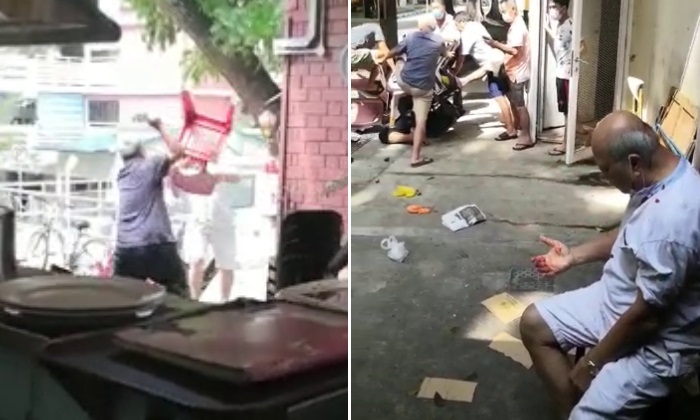 A 50-year-old man was arrested after a slashing incident at Block 111 Jalan Bukit Merah on Wednesday (June 29).

The victim, a 75-year-old man, was taken to hospital after sustaining injuries to the head. He was conscious at the time.

Police told TNP that they were alerted to a case of assault at the location at 11.15am.

At the scene, they learned that the 50-year-old man had allegedly slashed the head of the older man with a knife.

The 50-year-old was arrested for voluntarily causing hurt by dangerous weapon.

The two men are believed to have known each other.

In one of them, the 50-year-old male, in a black shirt, attempts to hit the older man who uses a chair to block his face.

A few bystanders then attempt to subdue the 50-year-old.

If convicted of voluntarily causing hurt by dangerous weapon, the offender faces up to seven years imprisonment, a fine, caning, or both.