Man shouts at bus driver during dispute over payment: "Don't raise your voice at me ah!" 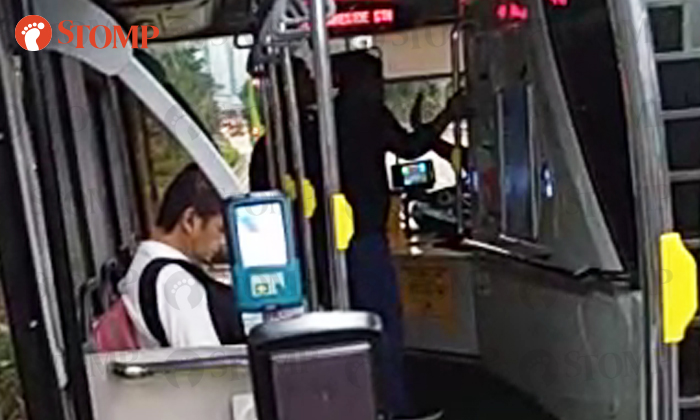 A commuter and a bus driver were caught on camera getting into an heated argument over fare payment on Friday morning (Sep 6).

Stomper Mazlin witnessed the incident that occurred on board bus service 180 at around 7.15am, and captured a video that he sent to Stomp.

He said: "We were travelling Boon Lay Way, towards Bukit Panjang Bus Interchange.

"A man's EZ-Link card had insufficient value, so the bus driver asked him to pay cash in a high tone.

"The man was unhappy with the bus driver's behaviour and they got into an argument."

In the video, the man can be heard saying: "Don't shout at me like that."

When the bus driver responded, the man yelled: "Eh, don't raise you voice at me la! Bloody hell. Next time I go down la."

The driver then said: "I want you to pay."

He also denied raising his voice at the man.

Another commuter can be seen intervening in the video.

The man is later heard explaining that he did not refuse to pay, adding: "Who say I don't want to pay? I say I want to tap the EZ-Link."

Mazlan added: "After the man paid with cash, he went to sit down."

Related Stories
Man goes 'raving mad' after woman asks him to turn down music, both want to Stomp each other
Man hurls vulgarities at guy on bus, challenges him to fight for 'looking' at him at Boon Lay
Woman demands compensation from MRT commuter during dispute, tells "false witness" to shut up
More About:
dispute
argument
Bus