Man goes 'raving mad' after woman asks him to turn down music, both want to Stomp each other 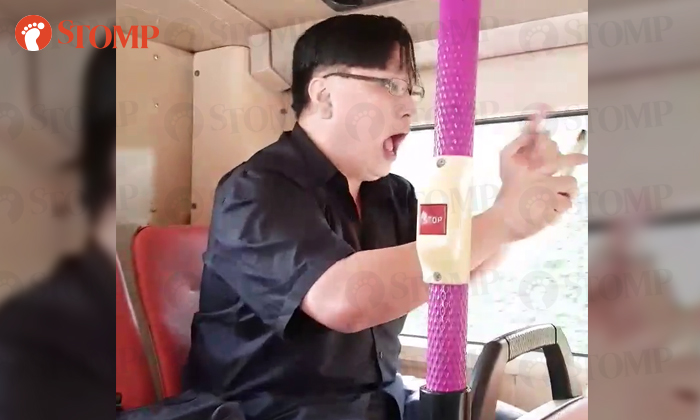 A man was outraged when a woman asked him to lower down the volume of his music, with the dispute culminating in both parties threatening to Stomp each other.

Stomper Anonymous witnessed the incident while on board SBS Transit bus service 186 on Tuesday (July 2).

He said the bus was travelling along Queensway at around 9am when the argument occurred.

Anonymous told Stomp: "A male commuter was playing his music loudly in the bus and a woman asked him to turn down the volume. Another lady also asked him to use earplugs.

"He went raving mad and said he was going to call the police on the woman for stopping him from playing his music.

"They Stomped each other so this is the third-person view."

A video contributed by Anonymous shows the man in the midst of an agitated rant, saying: "I complain you instead! I should be the complainant!"

The woman then asked, "Would you like to be on Stomp?"

This led the man to respond: "I will put your photo over there instead, because you stopped me from playing music, that is wrong of you! Not me.

"Because you made me angry in the first place and I've got every right to vent my feeling! You did the wrong thing!"

Anonymous said the dispute lasted for around 15 minutes, adding: "The bus driver was about to call police, but everyone decided to let it go because the man left the bus.

"They both filmed each other, so you may expect the videos to appear somewhere."

Related Stories
Man hurls vulgarities at guy on bus, challenges him to fight for 'looking' at him at Boon Lay
Man who blasted music on train rages at commuter after being asked to lower volume: "I'll cut your penis!"
Woman demands compensation from MRT commuter during dispute, tells "false witness" to shut up
More About:
dispute
argument
Bus