Man hurls vulgarities at guy on bus, challenges him to fight for 'looking' at him at Boon Lay 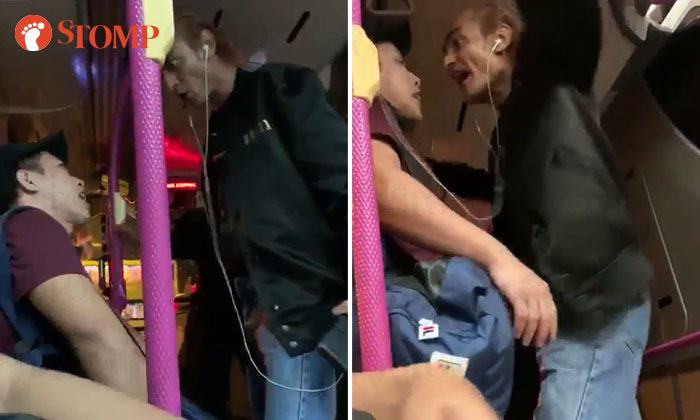 A man was seen hurling vulgarities at another man on a public bus and challenging him to a fight for allegedly 'looking' at him at a bus stop along Boon Lay Way on Sunday evening (June 16).

Stomper Jan, who was on the receiving end of the man's tirade, alerted Stomp to the incident and shared videos of what had happened.

"My sister, her boyfriend and I saw this guy in black dancing on the road near the bus stop before The Synergy building at about 10.48pm," he said.

"He caught our attention so we looked at him to see what he was doing.

"He then followed us when we boarded bus service 99.

"I didn't see him tap his card and he went straight to me and started swearing and asking for a fight."

In the video, the man in black is heard challenging Jan to a fight.

After Jan accuses him of being drunk, the man starts talking about how everyone has their own 'problems'.

He then tells Jan to shut up before repeatedly shouting "f**k you" at the Stomper who responds in kind.

The argument heats up when the man gets closer to Jan who warns him not to touch him.

The guy threatens to "hammer" Jan before a voice near the front of the bus is heard telling them to stop.

"After the video, the man sat down for a while before getting off the bus," said Jan.

"I was rushing home and tired after work.

"Since there were no injuries, I did not make a police report."