NYP student who took upskirt video of woman was a 'loner' and under 'severe stress': Lawyer 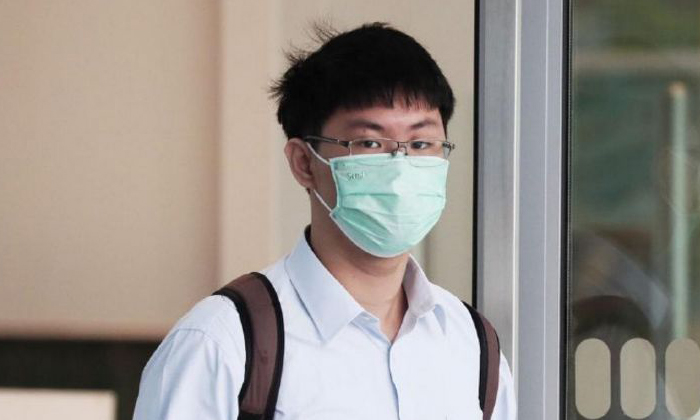 A Nanyang Polytechnic student was travelling on a public bus along Ang Mo Kio Avenue 10 when he used his mobile phone to record an upskirt video of a woman.

Chan Jay Ko, 19, pleaded guilty in a district court on Tuesday (Dec 15) to a voyeurism charge.

The court heard that the victim, now 20, boarded SBS service 45 with her boyfriend at around 5.30pm on Jan 21 this year and they stood at the back as it was crowded.

Deputy Public Prosecutor Rashvinpal Kaur Dhaliwal said that Chan was sitting in the bus at the time and the woman had her back turned at  him.

The woman’s 22-year-old boyfriend then noticed that Chan was holding his mobile phone in his left hand with the screen facing downwards.

The DPP added: “The witness then noticed the accused slowly moving the mobile phone from his left knee outwards in the direction of the victim with the back-facing camera tilted towards the victim.

“He immediately confronted the accused who was startled by the witness having caught him in the act of taking an upskirt video of the victim.”

Chan admitted that he had taken an upskirt video of the woman and deleted the clip.

The woman’s boyfriend alerted the police and officers arrested Chan at a bus stop.

They seized Chan’s electronic devices but did not retrieve any other upskirt videos.

On Tuesday, defence lawyer Harbajan Singh told the court that his client was a loner and had been under "severe stress".

Mr Singh also said that Chan is an honest person who admitted to his offence immediately after he got caught.

Deputy Principal District Judge Seah Chi-Ling has called for a report to assess the teenager's suitability for probation.

The Singaporean teenager will be sentenced on Jan 26 next year.

An offender convicted of voyeurism can be jailed for up to two years and fined or caned.

In a statement, the polytechnic told The Straits Times that it takes a strong stand against sexual misconduct and expects all members of its community to conduct themselves in accordance with the law at all times.

"We will not hesitate to mete out sanctions against any member of our community who breaches our code of conduct," said its spokesman.