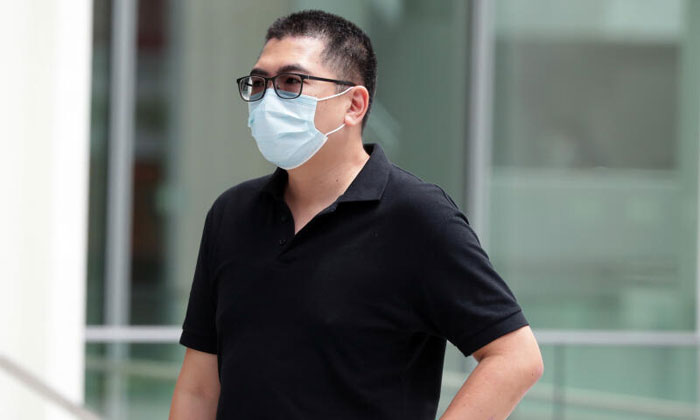 A man who took upskirt videos of his classmate was caught while reviewing one of the videos on the train.

Royston Kesavan, 40, was jailed for six weeks on Wednesday (March 10). The married man pleaded guilty to one count of insulting a woman's modesty.

He took a total of seven videos, of which the first six he had deemed unsuccessful because they did not capture the victim's underwear.

Kesavan was pursuing a master's degree in health administration at Parkway College of Nursing and Allied Health at the time of his offence.

On Sept 26, 2019, he met some classmates for a group discussion at a room at Academia @ Singapore General Hospital.

At about 8.35pm, he decided to record an upskirt video of a classmate who was sitting across from him at the table.

He targeted her as she was the only one in the room wearing a skirt that day.

For the next 30 minutes, he discreetly positioned his phone under the table, angling the camera towards the victim's skirt.

Kesavan took seven videos, which lasted from two seconds to about a minute and a half.

The court was told he had reviewed the videos while concurrently recording them.

He stopped after he managed to get a clear view of the victim's inner thighs on his seventh attempt.

At about 10.10pm, Kesavan was on his way home on the train towards Pasir Ris MRT station when he decided to review one of the videos.

An officer with the Public Transport Security Command who was on patrol spotted him reviewing the video on the train and approached him.

They both alighted at City Hall Station, and the officer instructed Kesavan to hand over his phone.

But the accused was reluctant to do so, and instead handed over his spare phone to the officer.

He eventually handed over the right phone, with the seven upskirt videos in the deleted folder. Kesavan was then arrested.

On Wednesday, Deputy Public Prosecutor Phoebe Tan urged the court to jail him for eight weeks.

She said: "There is a clear element of persistence in the present case... He was increasingly emboldened with each attempt."

She noted that with the exception of the third and final attempts, the length of the videos had increased each time.

But Kesavan's lawyer, Mr Ramesh Varathappan, asked the court to call for a probation suitability report for his client.

Probation is typically for young offenders up to the age of 21, but is sometimes used as a sentencing option for older offenders in exceptional circumstances.

Mr Ramesh said the accused would be more receptive to probation as he was mature, and he was not diagnosed with any medical conditions and would therefore have a lower chance of reoffending.

District Judge Adam Nakhoda then questioned the lawyer's line of reasoning, saying that he had essentially turned the logic of probation as a sentencing option on its head.

The judge noted that in cases whereby a medical condition was assessed to be a contributory link, the court may consider a sentence that deals with the condition to prevent reoffending.

"In this case, there's no other factor that led (the accused) to committing these offences," he said.

Mr Ramesh then asked the court to consider a high fine with a short custodial sentence.

The judge said he agreed with the prosecution, and that a jail term was warranted.

"The persistence in this case is quite extreme," he said.

"(The accused) took longer and longer videos, he was certainly goal-oriented and intent on capturing an upskirt video of the victim."

For insulting the modesty of a woman, Kesavan could have been jailed for up to a year, or fined, or both.

Related Stories
Ex-teacher, imprisoned in 2017 for upskirt videos, gets jail for molesting woman after release
Man caught by shoppers after failed upskirt attempt at Nex, found with obscene materials of other victims
Man arrested for voyeurism after allegedly taking upskirt videos of woman at Tampines MRT station
More About:
upskirt
court
pervert