Man returns wallet he picked up at Esplanade Exchange, apologises for delay as he was busy with baby and night shift 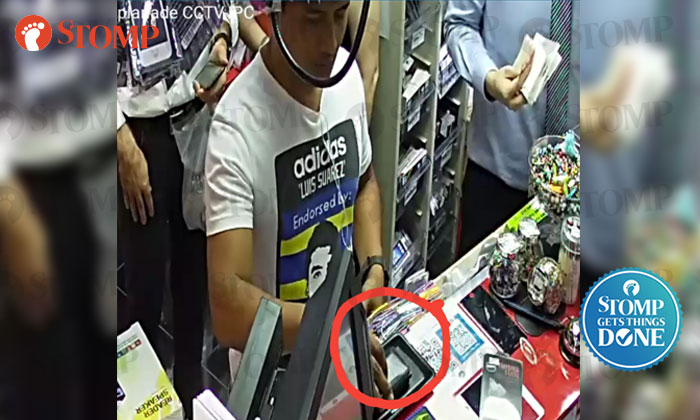 The man who was recorded on camera picking up another customer's wallet from the counter of a retail shop at Esplanade Xchange at 1.30pm yesterday (Aug 23), has returned it and gave an explanation about why he took it.

In an earlier Stomp article, it was reported that we received CCTV footage of what happened from Stomper M, who said that the wallet belongs to a Romanian customer named Mr Lonut Dogarel.

In the video, Mr Dogarel can be seen leaving his wallet on the coin tray.

The man who was in an Adidas shirt later noticed the item while making payment at the cashier, flipped it open, before removing it from the tray and holding it in his hand.

A police report was made thereafter.

Following the report, the man who removed the wallet wrote in to us to share his side of the story.

He said in an email: "Please allow me to clear the air.

"I have called and met the rightful owner and have returned his property today (Aug 24) at around 11am.

"It was never my intention to steal. All I was thinking was that someone left it there accidentally."

"I took it with me with the intention to return it or hand it over to the Police.

"But due to being tied up with things, baby and rushing for night shift, I delayed it.

"I know it was all my fault and I have learnt my lesson not to touch anything that does not belong to me.

"I have personally gone to the owner's office, returned (the wallet) with everything intact and apologised to him for the mess I have done."

Related Stories
Man who picked up customer's wallet from shop counter at Esplanade Xchange, please return it
Guy takes $10 sunglasses and stuffs it in his pocket at shopping mall store
Man takes phone from shop while friend distracts staffer by asking for phone price
More About:
wallet
return
Stomp gets things done
Esplanade