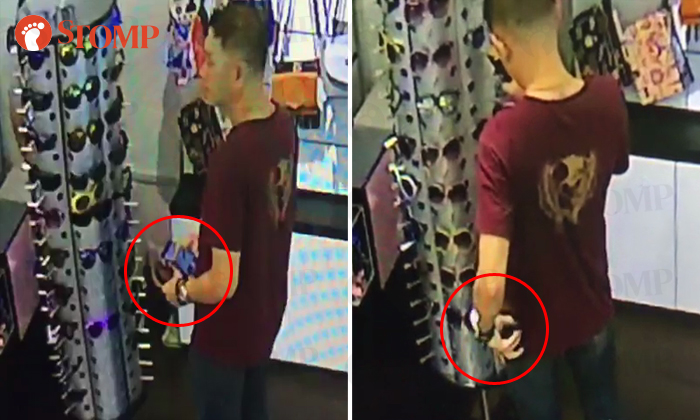 A man was caught on CCTV footage taking a pair of sunglasses from a store in a shopping mall and putting it into his jeans pocket, before leaving the premises.

According to Stomper Raymond, the incident took place on July 22 at 12.53pm. He said that it occurred in Paya Lebar Square, though Stomp is unable to confirm this.

Raymond contributed a video that started off with the man holding a pair of shades in his left hand, while continuing to browse the other sunglasses on display.

At this point, he can be seen placing the shades into his left jeans pocket.

Afterwards, the man continued turning and looking at the spinning display rack, before trying on another pair of sunglasses.

He then took off the sunglasses and placed it back on the display rack, with help from a female employee.

The video shows him also repeatedly touching his left jeans pocket and pulling down his shirt over the pocket.

The man then went on browsing other items at two other spots in the shop, before appearing to bid farewell to the store employee with a wave and leaving the place.

Watch what happened in the video below.

Related Stories
Woman takes shirt from Clementi Mall store, hides it on herself and leaves without paying
Not the sharpest tool in the shed: Man caught stuffing axe under his t-shirt at Tampines shop
Man who took iPhone from JB massage parlour returns it to S'pore police station after Stomp report
More About:
stealing
steal
shoplift
shoplifting
theft
thief
cctv