Man who picked up customer's wallet from shop counter at Esplanade Xchange, please return it 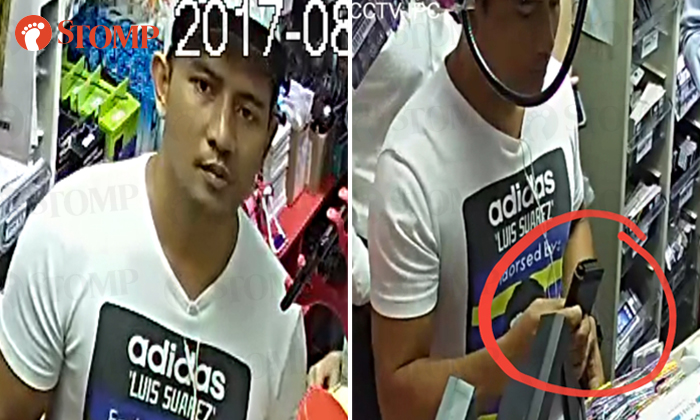 The man has returned the wallet after the Stomp report was published.

In an email to Stomp, he said he had planned to return the wallet or hand it over to the police, but was delayed by other commitments.

See what he had to say here.

A man was caught on camera removing another customer's wallet from the counter of a retail shop at Esplanade Xchange, at 1.30pm today (Aug 23).

Stomp received CCTV footage of the incident from Stomper M, who said that the wallet belongs to a Romanian customer named Mr Lonut Dogarel.

"The customer had gone to the back to test some wires and left his wallet on a coin tray at the cashier counter.

"When he returned, he realised that his wallet was gone. The wallet contains his FIN card, cash and other cards.

"There were two cameras in the shop which showed that this guy in an 'Adidas' shirt had taken the wallet.

"The customer has made a police report but he just wants his wallet back."

In the video, Mr Dogarel can be seen leaving his wallet on the coin tray.

The guy in the Adidas shirt later noticed the wallet while making payment at the cashier, flipped it open, before removing it from the tray and holding it in his hand.