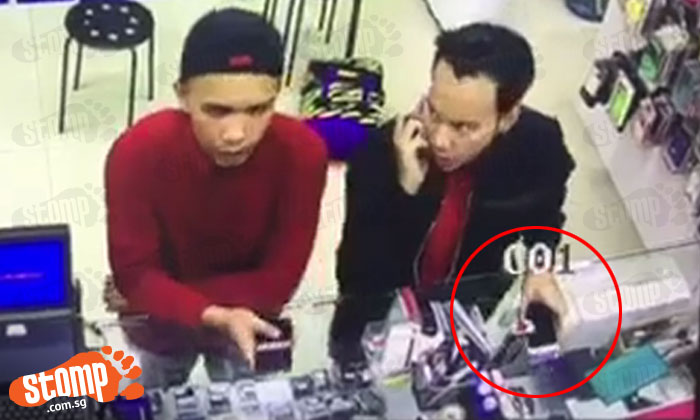 A man took a mobile phone that was on a counter as his friend was distracting a staffer in a shop located at Race Course Road on May 19 at around 8.39pm.

Stomper Alvin alerted Stomp to what happened and sent us a video of the incident that was recorded on CCTV.

At the beginning of the video, one of the men was sitting on a stool. His companion in a red shirt was standing beside him and had a cigarette in his mouth. He tried to sit on a stool behind him, but fell onto the floor in the process.

Thereafter, the man in red made his way to the counter and subsequently appeared to be speaking to a staffer.

His friend who was wearing a black jacket joined him after a while, and took a white phone with a red cover that was on the glass counter. He placed the device in his pocket as his counterpart looked on.

Before the they left, the man who took the phone looked around the shop and stared right into the CCTV camera for a brief period of time.

The Stomper, who was working at a nearby shop, said that the phone belonged to the staffer. The latter had gone to Alvin's shop after the incident to ask if he knew where the phone was.

Alvin said he did not know the whereabouts of the device and initially thought that it was a prank.

He only found out what happened after he saw the CCTV footage.

"The men came first came to my shop to try and sell their phone. The man in red looked like he was under the influence of substances as he has slurred speech and could not walk properly. They left after I told them I don't buy second-hand phones.

"They went to my friend's shop on the pretext of selling a used phone. While my friend was checking the price for them, they walked towards the counter and took the phone."

"The phone model was an Oppo R9 with a red casing."