Man repeatedly slaps dog with slipper at Pasir Ris: There is no reason to hit a dog, says SPCA 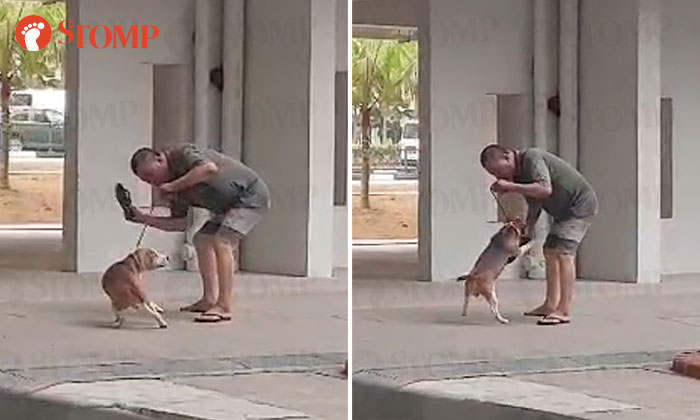 Stomper Hariz was horrified when he saw a man using his slipper to hit his pet dog at Block Block 110 Pasir Ris Street 11 on Wednesday evening (Sep 18).

He shared with Stomp a video he took of the man hitting the dog that was on a leash.

"I saw this angry man repeatedly slapping his dog," said the Stomper.

"I quickly pulled out my phone to record and was pretty sure he saw me afterwards.

"I hope this isn't a normal occurrence for dog owners."

In response to a Stomp query, Dr Jaipal Singh Gill, executive director of the Society for the Prevention of Cruelty to Animals (SPCA) told Stomp that such cases of abuse are unfortunately too common.

"There is no reason to hit a dog and to cause it unnecessary pain," he said.

"Physically assaulting an animal in order to discipline it is an archaic and counterproductive practice.

"When dogs are hit, they might lose trust in their owners and develop problematic behaviours like fear-biting.

"The SPCA advocates for modern, humane and force-free training methods which are much more effective in the long run."

Related Stories
Woman picked chihuahua up by its neck and threw it down 1.5m, fed it only once every few days
Video of woman burning puppy's eyes and breaking its limbs was filmed in Philippines: PETA Asia
AVS advises owner to improve dog's living conditions after it was left on short tether under hot sun
More About:
animal abuse
animal cruelty
dog
pet