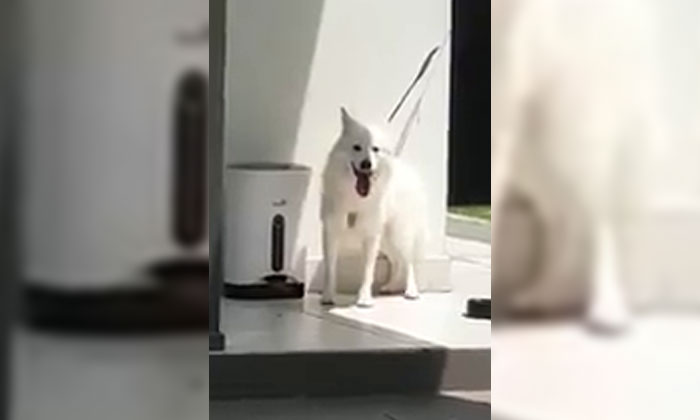 The Animal and Veterinary Service (AVS) told Stomp that it has advised a dog owner to improve his dog's living conditions after it was seen tethered out in the sun for hours on Aug 2.

A video of the dog was posted on Chained Dog Awareness (CDA) in Singapore's Facebook page.

The page criticised the owner for leaving the white Japanese Spitz on a short leash for hours, causing it to be unable to lie down.

"This poor dog was caught chained up (can't even lie down properly) on a short leash overnight and only this afternoon (Aug 2), a neighbour decided to alert us on social media," the post read.

"Poor dog was exposed to the hot afternoon sun for hours.

"Out of desperation, we climbed over the gate and released this dog from the leash."

CDA said that AVS arrived after the dog was freed from its leash.

In a comment on the video CDA said: "We posted the video to highlight the dog's plight after doing what we need to do because we strongly believe that tethering a dog is inhumane, cruel and this is what happens when [an] owner carelessly leave[s] their dog on a chain exposing the animal to harm.

"We wouldn't want to trespass on private property if we have a choice."

"The Animal & Veterinary Service (AVS), a cluster of National Parks Board, has been alerted to and is concerned about the case of a pet dog left on a short tether in the hot sun.

"Upon receiving feedback, AVS officers visited the scene on the same day to investigate.

"We have advised the dog’s owner to improve the dog’s living conditions i.e. allow the dog to free roam and to provide adequate shelter, food and water at all times.

"Our officer conducted a follow-up inspection on 7 August and saw that the owner has since done so.

"If the pet owner is found to have failed in his/her duty of care, AVS will take enforcement action.

"Our priority is always to ensure the welfare of animals."