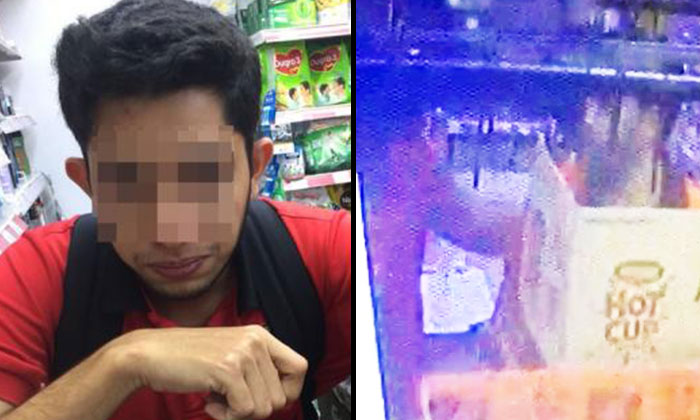 A man allegedly upset when he was denied alcohol at a supermarket in Jalan Bukit Merah, attacked the cashier.

The incident happened at a Fortune Supermarket branch at Block 112 Jalan Bukit Merah on Friday (March 30) at 6.40am -- just 20 minutes before the permitted hours for the sale of alcohol.

The 24-year-old supermarket employee comes from India, and has only been working in Singapore for six months, reports Lianhe Wanbao.

He told reporters that he had explained to the customer why he had to reject the purchase, and asked him to come back at a later time.

However, the man flew into a rage.

“He started becoming aggressive. He just threw punches at me!”

The employee did not have time to dodge the punches, and his assailant continued raining blows that landed on his face, forehead, and jaw.

The attack also caused the part of his face under his left eye to swell.

He described his assailant as a man with an average build in his 20s, about 185cm tall.

The employee added that the man did not seem drunk at all during the assault.

The owner of the supermarket, Mr Chen, 52, told Lianhe Wanbao that his employee was conveyed to Singapore General Hospital (SGH) for treatment.

The doctors gave the employee three days of medical leave, and his $150 medical bills were paid by Mr Chen.

The incident was captured on a closed-circuit television (CCTV) in the store, which showed the man fleeing after attacking the employee.

In response to media queries, a police spokesman confirmed that the police received a call for a case of voluntarily causing hurt at 6.45am on March 30.

The victim was conveyed conscious to a hospital for treatment, and investigations are ongoing.

Under the Liquor Control (Supply and Consumption) Act which came into force on April 1, 2015, retail shops are not allowed to sell takeaway alcohol between 10.30pm and 7am.

Drinking is also banned in all public places during the time period.

The incident comes after another 7-Eleven employee was assaulted at a Changi Village outlet for refusing a customer's purchase of alcohol.