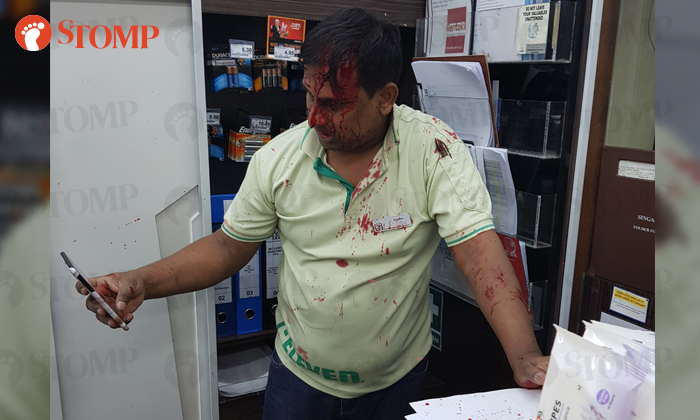 The police have released a photo of the suspect involved in the case and are appealing for information.

A male customer assaulted a 7-Eleven employee after being unable to purchase alcohol from the store at Changi Village on Feb 15, at around 10.37pm.

Stomper Firdaus alerted Stomp to the incident after witnessing the attack, which he said last for about 30 seconds.

A photo that he took shows the employee with a bloodied face.

There was also blood on his arm, staff T-shirt and on the walls.

"He was the only staff around and was beaten up by the customer," Firdaus told Stomp.

"The employee called the police and ambulance himself."

The 43-year-old employee was subsequently sent to Changi General Hospital (CGH) and is currently on medical leave.

In response to queries by Stomp, a 7-Eleven spokesman said the company is "aware of the incident which occurred at around 10.37pm", and that the male customer apparently "got angry and upset that he was unable to purchase beer at the store."

"All cabinets containing alcohol are locked as per the retail sales restrictions under the Liquor Control (Supply and Consumption) Act," the spokesman added.

The spokesman told Stomp: "The police was notified and the team member was immediately sent to Changi Hospital where he received out-patient treatment. He is currently on medical leave and recovering at home.

"The 7-Eleven team has visited him and will continue to provide all necessary assistance to him and his family to help in his recovery following this incident."

The spokesman also said that 7-Eleven is cooperating fully with the police in their investigations into the incident.

Responding to a Stomp query, the police said they were alerted to a case of Voluntarily Causing Hurt at 1 Changi Village Road at 10.29pm.

The Singapore Civil Defence Force (SCDF) also told Stomp that it was alerted to the incident at around 10.40pm and conveyed one person to CGH.