Man puts on an act to steal 2 pairs of Adidas slippers in Hougang, deserves a Razzie 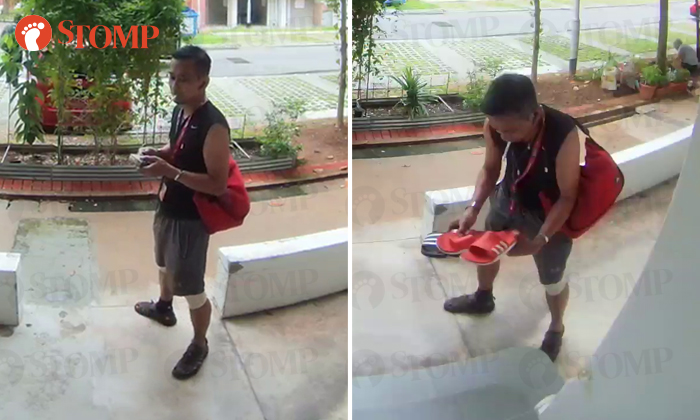 A man was caught on camera stealing two pairs of Adidas slippers from outside a Hougang flat on Tuesday afternoon (Aug 30).

Stomper M shared closed-circuit television (CCTV) footage of the incident that occurred at Block 427 Hougang Avenue at around 4.48pm.

In the video, the man can be seen pretending to smoke while loitering outside M's unit. He has a cigarette in his mouth, but it appears to be unlit.

The man then bends down and clumsily picks up two pairs of Adidas slippers, before walking away with his loot.

While he put up quite the performance, he failed to notice the Stomper's CCTV camera.

M said she learnt of the theft on Thursday when her son could not find his shoes, prompting her to check CCTV footage.

She told Stomp: "The CCTV camera is too small for him to notice that it's there. It captured the whole process. He acted as if he was smoking and placing the shoes nicely, then stole them."

According to M, the Adilette slip-flops are worth $55 per pair.

She has not made a police report yet, but will be doing so later today.

"Theft is a wrongful act and even my teenage boy knows that. I hope this guy will be caught and become popular!" she added.

Well, the perpetrator will not be a famous A-lister in Hollywood anytime soon with such a performance, but can perhaps be considered for a Razzie Award.

Related Stories
Man takes woman's belongings from her basket at Value Shop, puts them in his own trolley
Auntie takes bag of items belonging to shopper who's still in Japan Home store
Thief empties cash from Jalan Besar pao fan stall into his bag
More About:
theft
stealing