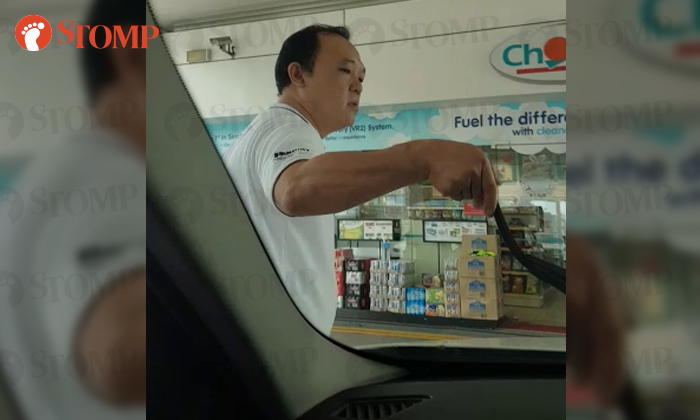 A driver was caught on camera hurling vulgarities at a fellow motorist and pulling the windscreen wiper of his vehicle after they got into a dispute at a petrol station along MacPherson Road.

Stomper Angie, the motorist's wife, sent video footage showing part of the incident to Stomp. The incident took place at SPC Macpherson yesterday (Dec 3), at around 11.15am.

She told Stomp what led to the argument between her husband and the other driver: "My husband was turning into the petrol kiosk when a car driver was blocking the right lane for petrol. The driver was trying to get into the left lane.

"There were two pumping stations on the left. The first front lot was taken by the car driver, but he was not trying to turn into the second back lot fully, instead blocking the right lane which my husband was trying to turn into.

"Thus, my husband tapped his horn to signal to the driver that he wished to turn in.

"I would like to emphasise that it was a 'tap' horn, and not a long horn. The petrol kiosk has CCTV footage if evidence is needed.

"The staff on duty can be a witness to how the driver came out of his car, trying to provoke my husband and raising his voice.

"When we both were parked, he came out of his car and challenged my husband, scolding vulgarities and pointing at him non stop. He asked why my husband couldn't wait and why he had to honk.

"My husband explained that he was blocking the way and that he didn't have a signal light on, thus we wouldn't know his parking intentions.

"However, he just went on scolding and pointing his middle finger. Even after my husband ignored him and went to make payment, this driver continued his aggressive behaviour, which was why I took out my handphone to record a video of his vulgarities.

"In the video, you can hear how he told my husband, 'I not happy, I see your face I not happy.'

"I stopped recording for a while and that was when the driver said he was going to stand in front of our car and not move, and that if my husband had no patience to wait then what was he going to do to him. This is outright ridiculous and childish behaviour."

Angie said she then continued recording her video: "As you can see, the driver intentionally pulled our windscreen wiper. He was also using vulgarities on me and pointing his finger nonstop."

According to Angie, she and her husband have reported the incident to the Traffic Police.