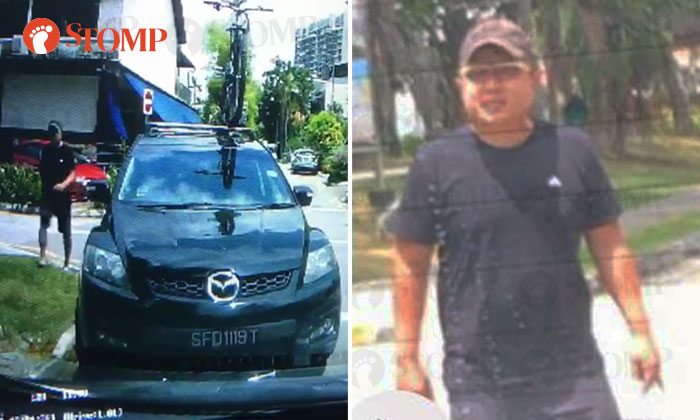 A Mazda driver with a licence plate reading SFD1119T was recorded on camera blocking a motorist along Seletar Hills Drive, alighting, walking towards a row of shops, before returning minutes later and hurling vulgarities at her yesterday (Sep 3) at around 11.55am.

In the video taken by Stomper Tay, the motorist who was at the receiving end of the verbal abuse, the aggressive driver can be heard saying 'get 'f***** by dogs' during the confrontation.

The Stomper said in a telephone interview that she was waiting for her child and mother-in-law when the Mazda driver suddenly turned into the road against the flow of traffic at a relatively high speed and blocked her car.

She told Stomp that was the first time she had seen the driver and she did not have any previous encounters or misunderstandings with him.

Concerned with the speed at which the driver was going, as well as the fact that he was going against traffic, Tay decided to honk at him in response.

The driver then stopped his car right in front of the Stomper's moments later and alighted. He gestured at the Stomper, before walking towards some shops at the rear of his vehicle.

Tay believes he intended to leave the Mazda parked by the road to run some errands.

Around two to three minutes later, he returned and confronted the Stomper.

At that point, the rear door of Tay's car was open as her child and mother-in-law had arrived, and were boarding the car.

It was then that the words 'f***** by dogs' were picked up by the Stomper's camera after the driver approached the car's open door.

According to the Stomper, the driver then hit the window of the car's front passenger seat.

The Stomper's 88-year-old grandfather-in-law was occupying the seat, and had a shock. Three children, including the child who was boarding earlier, were also in the vehicle.

Thereafter, Tay said the man walked over to hit the driver's window and challenged her to a fight.

Tay also reported that he spewed more vulgarities outside the car throughout the confrontation, but her camera was unable to pick up what he said as he was not close enough.

The Stomper then drove away off thereafter. Before she left, she stopped her car near the rear of the Mazda and told the driver to go up to her.

He walked to her car, but Tay drove away before he approached.

She explained that she did this to put some distance between the driver and his Mazda, so he could not get into the vehicle to chase her.

The Stomper since made a police report, and was advised to take the matter to the State Courts.