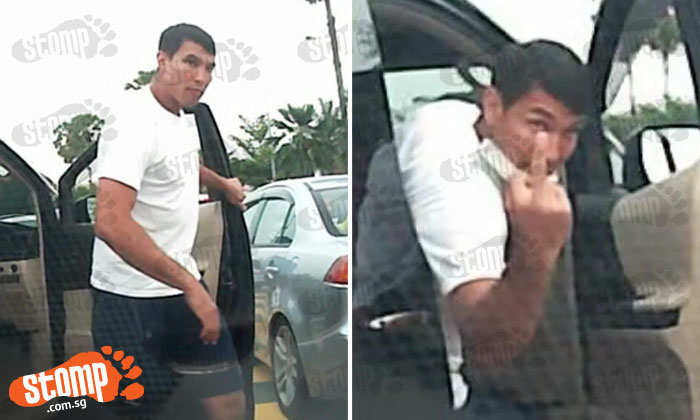 Stomper DD was confronted by an aggressive driver following an accident in Johor Bahru (JB) before the Malaysia–Singapore Second Link on Tues (Mar 14) at around 6.30pm.

The Stomper, who is currently overseas, recounted what happened to his wife. Stomp spoke to the latter in a telephone interview to find out more about what happened.

"My husband was on the way home from his office in JB. The road was quite jammed.

"A driver then tried to cut in front of my husband's car.

"My husband stopped his vehicle. The driver continued going forward and hit his car.

"He alighted after that and scolded my husband."

In a video the Stomper sent, the driver, a tall Caucasian man, can be first seen gesturing at the Stomper from his car.

He then alighted and started condescendingly blaming the Stomper for the accident using vulgarities.

At one point, the driver can be heard saying 'you shut the f*** up you dips***' as the Stomper was defending himself.

In the middle of the video, the driver walked back to his car and took his phone. He then went back to the Stomper again and demanded for his particulars.

The Stomper refused to reveal them, and told the Caucasian man that he should be the one providing his own particulars for the accident.

Following a stalemate over the exchanging of particulars, the driver said to the Stomper 'you f***ing retard' before going back to his car. There, he showed the middle finger.

DD's car sustained minor scratches in the accident. He plans to make a Police report with the Malaysian authorities.

The aggressive driver's car had a licence plate reading VB4774. The Stomper's wife believes the vehicle is a Kuala Lumpur-registered vehicle.