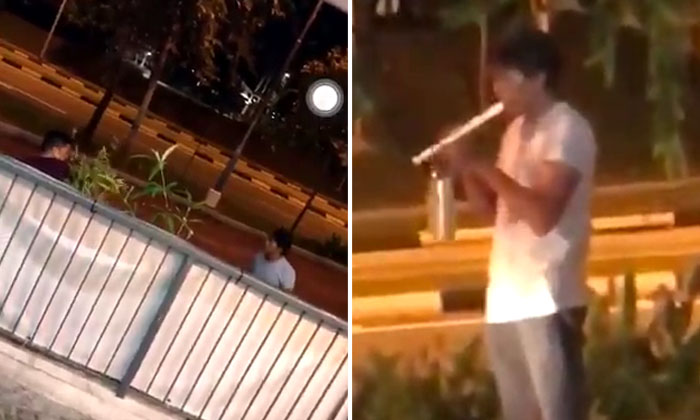 The police were alerted to a case of voluntarily causing hurt near Ci Yuan Community Club in Hougang in the early hours of Monday morning (Apr 29).

Two men were involved in a bizarre brawl that included a recorder and a potted plant.

Instagram user Lucas Oh was nearby and filmed the incident before posting them on his Instagram stories.

In the video, one man holding the recorder can be seen swinging it at the other man who is holding the potted plant.

Neither of them appears to strike the other but they continue before shouting at one another.

At one point, the man holding the recorder is seen holding a glass bottle of what appears to be alcohol in his other hand.

When the police arrive at the scene, the man holding the recorder starts playing his instrument.

In another clip, the man is seen sitting on the ground with his hands behind his back and surrounded by police officers.

It is unclear what sparked the fight and why the man with the recorder started playing it when the police arrived.

In response to a Stomp media query, the police said:

"The parties involved were advised on their legal recourse."