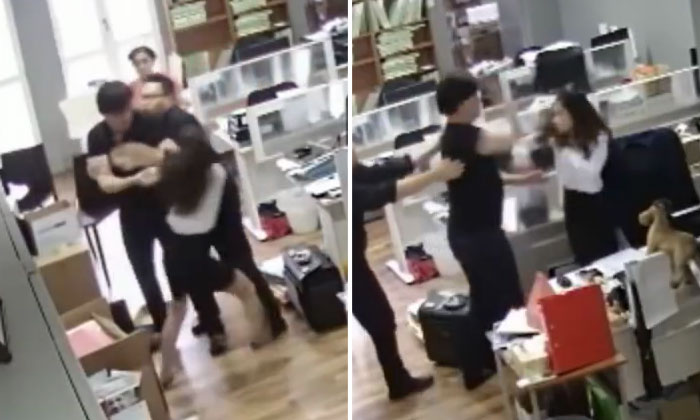 Entertainment lawyer Samuel Seow has made a police report over two leaked videos showing him beating and chasing after a female member of his staff in an incident which took place a year ago.

At that time, the lawyer had been accused of physically and verbally assaulting two staff members in separate incidents.

He also released a statement on Friday (April 26) hitting out at people who he said were "constantly and conscientiously" seeking to damage him.

Mr Seow, 46, is the managing director of Samuel Seow Law Corporation and owner of the Beam Artistes management firm. He is a high-profile entertainment lawyer and has represented big names like singer Tanya Chua and former actress Michelle Saram.

A Beam employee is reportedly the staff member being attacked in the videos uploaded on YouTube on Thursday (April 25). In one video, Mr Seow is seen speaking to a female employee, and extending his right hand to hit her face and upper body several times. He also shoves her.

In the second clip, Mr Seow chases after the same female employee. He shouts at her "you beat me" repeatedly, as he hits her.

The female employee is seen retaliating. Other colleagues intervene, attempting to restrain Mr Seow, who hits another female employee. Both employees are later ushered out of the office.

Last year, a 30-minute audio clip of the incident at Samuel Seow Law Corporation was circulated online. One of the employees also made a police report in which she accused Mr Seow of grabbing and pushing her, among other things.

She withdrew the report last May. Mr Seow also withdrew his own complaint to the police at the same time.

With the incident again in the news with the release of the video clips, Mr Seow said: "I hope to find closure with this issue soon, so I can move on with my life after my mistake from a year ago, so that the people who are constantly and conscientiously seeking to damage me can finally also, rest peacefully.

"I am unsure what the people who continually post edited sound clips and videos are trying to achieve. I had admitted that there was an issue in my office last year, and will leave the police to reach their findings.

"Being an entrepreneur is never easy and juggling between finding the work, feeding people and paying salaries on time is a constant struggle."

Mr Seow had apologised at a press conference last May for slapping his niece during a scuffle over "some work-related issue".

It is not known who uploaded the video clips.