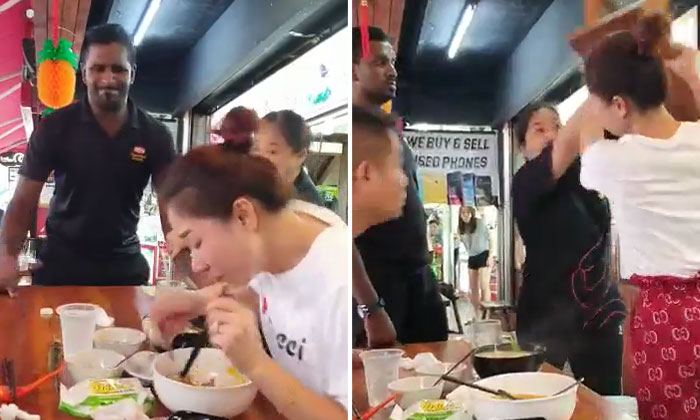 The police are investigating an incident where a man, believed to be a security guard, created a scene at an eatery on Friday (Apr 19).

Several Stompers alerted Stomp to a  video of the scene that was posted on Facebook by Alex Lim.

According to social media, the incident happened at Bugis Village, but Stomp is unable to confirm this for now.

The man, wearing a shirt with the word 'security' on it, is seen yelling at people working at the food stall.

It is unclear what the commotion is about.

A woman wearing a black shirt and an apron is seen holding him back as diners try to continue eating their meals despite the ruckus.

However, a woman eating with her husband and son enters the fray after the man lifts the table she's sitting at.

She stands up and raises a stool at the man but is stopped by the woman wearing an apron.

She then throws a drink at him and yells at him.

He comes over to say sorry but she says, "F**k you" before grabbing her bag and moving off.

He then continues to shout at someone out of the camera frame and telling them to "come here" while gesturing and pointing at them.

More people try to mediate the situation before police officers arrive and are seen speaking to the man.

The police confirmed with Stomp that a report was lodged regarding the incident and investigations are ongoing.