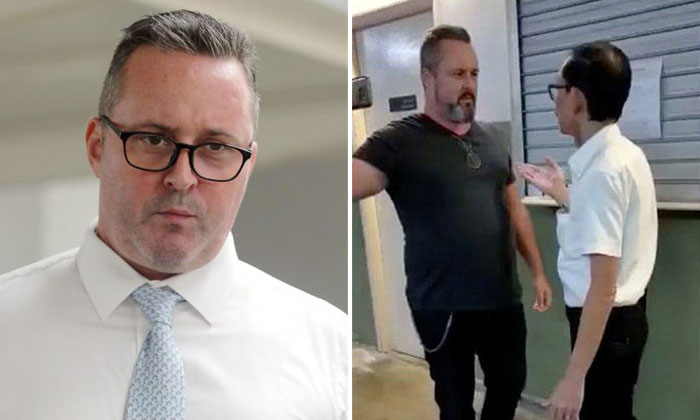 A man who punched a security supervisor at Roxy Square shopping centre earlier this month was charged in court on Wednesday (Apr 24) with one count each of assault and harassment.

Stomp reported earlier on the incident that was caught on video and went viral on social media.

Briton Stuart Boyd Mills, 47, who owns The Creative Mills, is accused of punching security supervisor Andrew Lim Cheng Hock's face at the loading bay of the shopping centre at around 12.15am on Apr 4, reports The Straits Times.

In the video, he used vulgar language towards Mr Lim as well.

According to Mr Lim, the man had approached a security guard complaining that he was trying to leave the building but could not find an exit.

When the guard tried to explain the main exit of the building was locked as it was late, the man refused to listen and asked to speak to the supervisor, Mr Lim.

Mr Lim was ignored when he tried to explain that there were several other exits from the building.

He added that the man began behaving in a threatening manner, gesturing with his hands and standing very close to him.

Mr Lim then asked a guard to take a video in case anything happened.

In the video, the man is seen hurling vulgarities at Mr Lim before tripping him.

When Mr Lim tells him to stop, he punches him and knocks him to the ground.

His assailant tried to run away after that but a guard who was recording the video moved to stop him.

According to Mr Lim, the man fled as the guard called the police.

Mills, who is represented by lawyer Ramesh Tiwary, will be back in court on May 15.

If convicted of assault, he can be jailed for up to two years and fined up to $5,000.

Offenders convicted of harassment can be jailed for up to six months and fined up to $5,000.