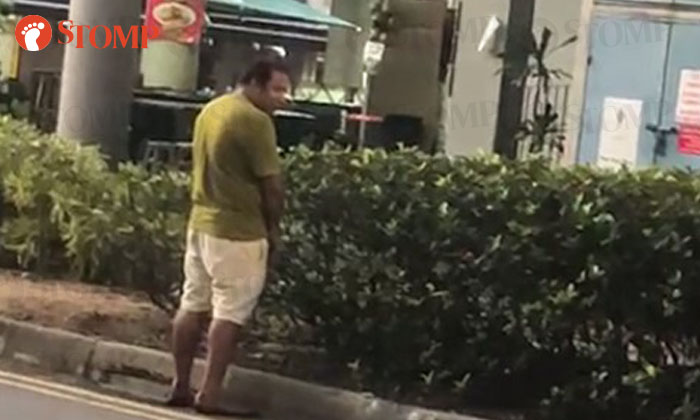 A man was spotted urinating along Upper Circular Road yesterday (Nov 29) in the wee hours of the morning.

Stomper Elle, who frequents the gym in Riverwalk Apartments, saw the man peeing into a bush at about 6.45am.

She had just parked her car at a parking lot nearby and saw the man when she alighted her vehicle.

She said: "I realised that the man was peeing.

"His back was facing me, which is why I could take the video.

"I was afraid he would see me and if he did, I would have run away."

In one of two videos Elle sent Stomp, another man oblivious to the man urinating can be seen walking by.

Elle says that she has not seen the man in the area before.

She added that there were many public toilets that the man could have gone to in the area.

"There are heaps of public toilets at The Riverwalk, the building just opposite, which is connected to Riverwalk Apartments.

"To my knowledge, they are all unlocked and can be accessed by anyone.

"There are also a few coffee shops nearby which might have public toilets," she said.

Elle told Stomp: "When I saw this man peeing, I felt very disgusted.

"I didn't know people still did that."

In one of the two videos the Stomper contributed, the man has finished urinating and walks away.

"He looked around for people who were watching then left," the Stomper added.

Related Stories
Driver pees in front of Stomper's car -- then throws cigarette butt on pavement after smoking
What's going on, Orchard Towers? Guy seen peeing at about same time couple were caught having sex
Boy in China apologises for peeing in lift, promises to clean it for a month
More About:
peeing
unhygienic
inconsiderate
disgusting