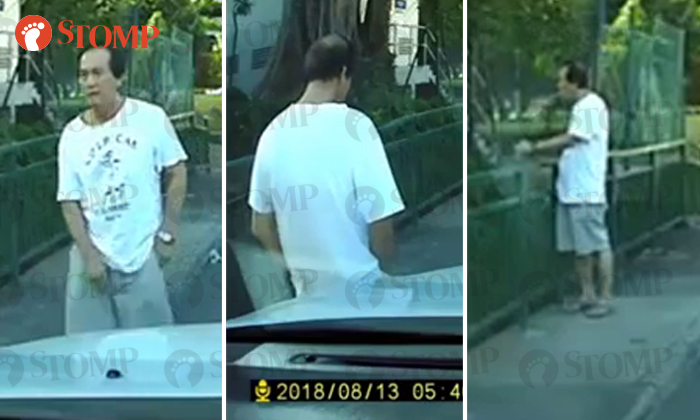 Stomper Lim left his car parked for about an hour along Chang Charn Road in Bukit Merah on Monday afternoon (Aug 13) and was dismayed at what he found upon returning.

He noticed a "yellow stain" on his bumper as well as a "strong stench of urine", leading him to check the footage on his in-car camera.

Lim said: "I saw in the video that this person of SLD1486L had stopped and parked his car illegally on the yellow line instead of a parking lot in front of my car at around 5.39pm.

"He urinated in front of my car and then smoked a cigarette before throwing it on the pavement. He left afterwards."

Lim added: "This is terrible and disgusting. He might have had an urgent call of nature but it's still not right of him to do this. What if there was a lady around?

"I also think that he was using my car as a shield while peeing so that nobody would see him.

"I am seriously disgusted to know that people can still behave like that in this era.

"I have informed the relevant authorities and they told me that they are investigating."