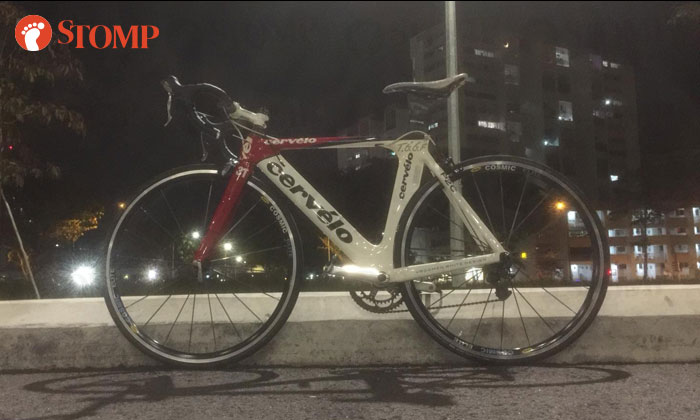 Stomper Farhan had parked his bicycle outside Hougang Mall to have breakfast at McDonald's on Tuesday (Nov 6) at about 8am but saw a group of youths run away with it about half an hour later.

He told Stomp he had not locked it to any fixture but made sure to leave the red and white bicycle in his view.

While he was eating, he noticed a group of three youths, who he described to be between 18 to 19 years old, smoking about five metres away from his bike.

"I saw them slowly move closer to my bike but I didn't expect that they would take it," he said.

"Suddenly, I saw one of them snatch the bike and they all ran off together."

He told Stomp it had happened too fast for him to do anything about it.

"It happened in a moment, I didn't have time to take a photo or video of them," he said.

Farhan said that the bike, which is a Cervelo P2C and worth around $1,000, actually belongs to his friend and they had exchanged bikes for a while.

"My friend is aware of this incident," he said.

The Stomper made a police report after leaving the restaurant.

In response to a Stomp media query, the police confirmed a report was lodged and investigations are ongoing.

Farhan hopes to spread the word about what happened in order to get the bike back.

If you have any information about Farhan's bike, kindly contact Stomp at stomp@stomp.com.sg or WhatsApp 9384 3761.

Related Stories
Man returns $2k worth of arcade tickets to Stomper after being caught on video
Woman tries on $69 shoes at Clementi store and walks off in them -- leaving own slippers behind
Man who took $99 bluetooth headset at AMK Hub, you have till Sunday before staff makes police report
More About:
bike
bicycle
stealing
theft