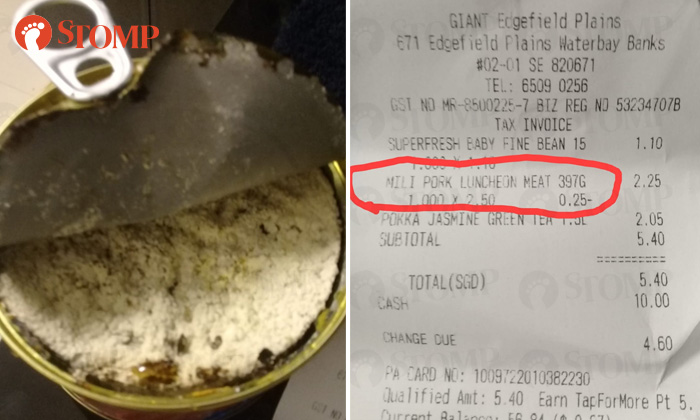 A man was shocked to find a can of smelly and mouldy luncheon meat after he purchased it from Giant Supermarket at Block 671 Edgefield Plains on Saturday (Sep 15) at about 8pm.

Stomper Arun found that the meat inside the can was completely mouldy and had a bad smell when he opened it after returning home.

"As soon as I opened the can, the smell came out," he said to Stomp in a phone interview.

"The luncheon meat was full of mould and stinks to the max.

"After finding out, I went back to Giant to rectify this.

"Some of the staff there tried opening a few other cans of the same brand, but they all appeared to be ok.

"I was very disappointed.

According to Arun, this was the first time he had such an experience.

Previously, he had always purchased the same brand of luncheon meat.

"Upon receiving a feedback from a customer regarding a ‘spoilt’ can of Mili Pork Luncheon Meat last Thursday, Giant promptly extended a refund to the customer and as a matter of urgency, immediately contacted the supplier to look into the issue.

"A random check on a few cans of the products at the store was also conducted and no similar issues were found.

"Nonetheless, Giant proactively removed the batch of products from the shelves on Thursday to protect customer safety.

"The supplier has collected the sample of the spoilt can of luncheon meat and sent it to their lab for investigation.

"We are in contact with the customer and will update him pending the outcome of investigation by supplier."