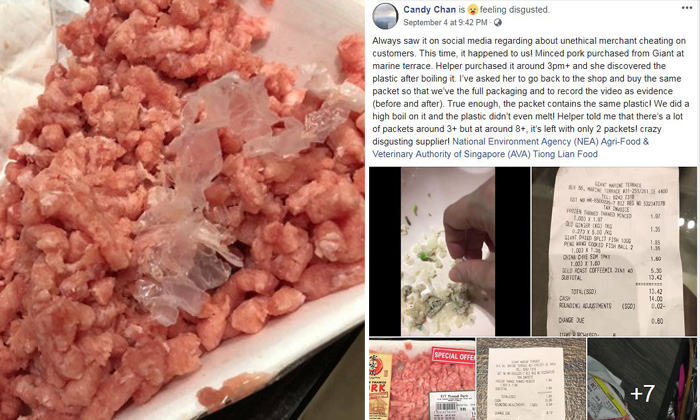 In response to a media query from Stomp, the Agri-Food and Veterinary Authority of Singapore (AVA) said that they are looking into the case of plastic strips that were allegedly found in a package of minced meat purchased from Giant Supermarket at Block 56 Marine Terrace.

According to the Facebook post, the minced meat was purchased at Giant Supermarket at Block 56 Marine Terrace by Candy's helper at around 3pm on Sep 4.

The helper found the plastic strips when she was boiling the meat.

Upon this discovery, Candy told her helper to purchase the same brand of minced meat again from the same Giant outlet so that they could have the full packaging and to record video evidence.

To her shock, the second packet also contained similar pieces of plastic in the meat.

She also explained how the plastic strips were still intact even after boiling the meat.

"We did a high boil on it, and the plastic didn't even melt!" Candy said.

"My helper also told me that there were a lot of packets when she bought it at 3pm, but at around 8pm, there were only two packets left," she said in her Facebook post.

"We initiated an immediate removal of this batch of item from all stores last Wednesday to protect customer safety, and as a matter of urgency, immediately contacted the supplier to look into the issue.

"We understand the supplier has since issued an apology and response regarding this matter.

"Customers are advised to contact our customer service team directly on 1800-891-8100 or via email service@giantsingapore.com.sg should they have any feedback or questions regarding purchases from our stores."