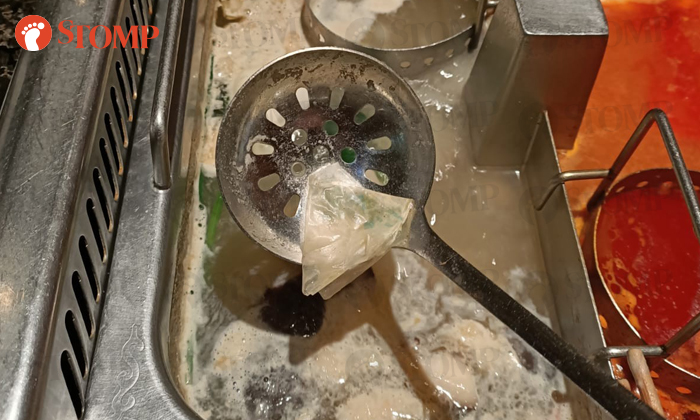 A diner was left disgusted after he allegedly found a piece of plastic in his hotpot halfway through his meal at Haidilao restaurant.

He recounted: "We didn't notice the plastic wrapper in the pot until much later during the meal.

"We were pretty upset because we had been eating for an hour before we noticed the plastic wrapper. It was absolutely disgusting and I lost my appetite after that.

"I suppose the plastic wrapper was already in the pot because when the staff topped up the soup, we didn't see anything from the jug."

Chan said that restaurant staff offered to replace his soup, but he stopped the meal as he had already lost his appetite.

He told Stomp: "Haidilao gave us some complimentary gifts such as soup base for steamboat, stir-fry pasta and tea as compensation. They waived off our bill of around $110+ too.

"I also reported the incident to the Singapore Food Agency (SFA), who said that they had done an inspection and all seemed to be in order."

Stomp had contacted Haidilao and the SFA for more info on April 7.