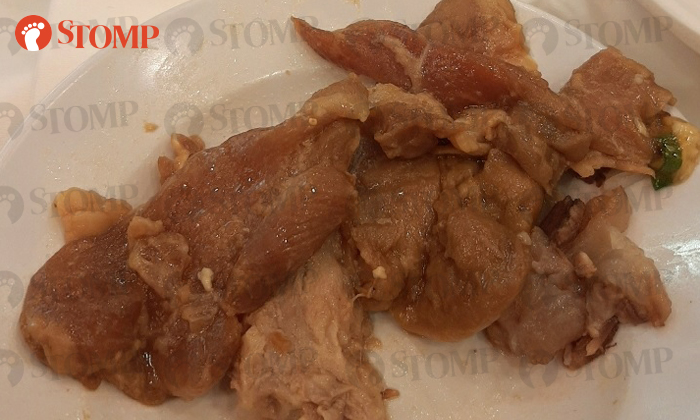 Ow said his family had visited the Chinese restaurant for dinner at about 7.15pm and one of the items they ordered was a mushroom chicken dish that cost $12.

He recounted: "My family member ate the chicken and found that it tasted strange.

"Upon checking, we realised that the chicken meat did not look normal and was raw.

"The restaurant manager was informed and he apologised."

Although a full refund of the entire bill was given, Stomper Ow is upset at the lack of follow-up after the incident.

Ow, who shared photos of the uncooked chicken, told Stomp: "No one followed up afterwards to check if my family member fell ill.

"After a week of silence, I reported the matter to the Singapore Food Agency (SFA).

"I feel like no one is taking the matter seriously.

"I also feel shocked by the incident as it's much more difficult to be served raw chicken in a restaurant than to strike 4D."

In response to a Stomp query, a spokesman for Lao Huo Tang said it had investigated the incident and confirmed that Ow visited the restaurant with his family of three at around 7pm.

The spokesman added: "The customer subsequently reported the uncooked food to staff.

"As per the restaurant's standard operating procedure (SOP), we immediately stopped all sales of the mushroom chicken dish and recalled all orders. However, this was the only plate that was uncooked.

"At the same time, the restaurant manager attended to the customer to apologise and did a full refund for the entire bill. The customer accepted the refund and our apology.

"In our eight years of operating Lao Huo Tang Restaurants, we had never came across an incident where uncooked food was served."

According to the spokesman, further investigation revealed that the incident was a direct result of faulty kitchen equipment, identified to be a steam oven in this case.

He told Stomp: "As part of our SOP, we will also be reviewing our food preparation SOPs for improvements, if any."