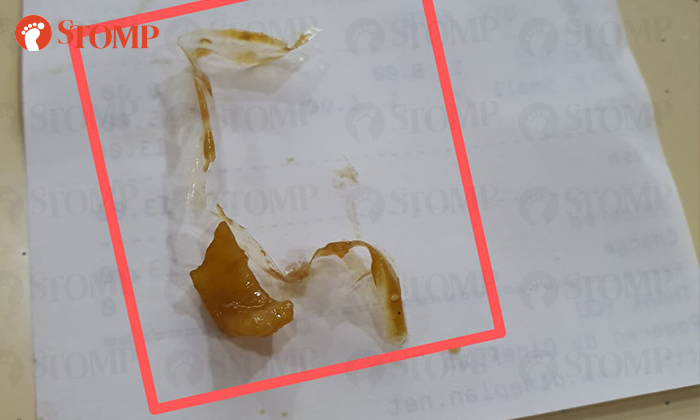 A man was concerned for his pregnant wife's health after she bit on something plastic while eating at a coffee shop at Block 848 Yishun Street 81 on Tuesday night (Dec 17).

Stomper James contributed photos of the foreign object and said: "I was with my wife and sister. My sister had just returned to her flat nearby after we had visited a night market nearby.

"My wife and I decided to have a meal at a coffee shop near my sister's flat.

"I can't remember the name of the coffee shop.

"We ordered our food from this stall called Fuman Seafood Zichar. I got some rice and my wife ordered noodles.

"My wife was chewing on her noodles when she felt something weird.

"When she removed the foreign object from her mouth, we realised that it was something plastic.

"We approached the stall and they offered to give us another bowl.

"I'm not sure if the person manning the stall was the owner.

"I told my sister about it and she said she'll has never eaten from that store and never will.

"My wife and I felt disgusted. She's pregnant and we don't know how this incident could affect her health.