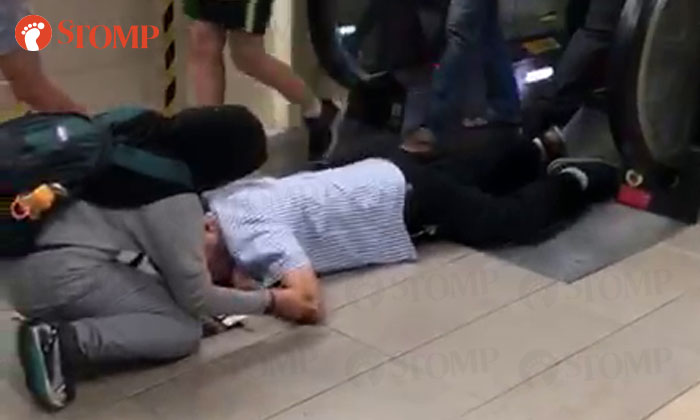 A man was taken to hospital after tripping on an escalator at Bishan MRT Station on Wednesday evening (Oct 31).

Stomper Justin alerted Stomp to the incident and shared a video he took at the scene at about 8.15pm.

In the video, the man is lying motionless at the top of an escalator as a woman bends down over him. Blood is seen pooling on the floor under his face.

An SMRT staff member is directing human traffic coming up the escalator to avoid the man.

"I think he was rushing to catch the train and tripped on the escalator while running up it," Justin told Stomp.

"There was a lot of blood flowing from his forehead."

Justin believes that the man is in his 50s.

"He was completely motionless and his eyes were closed," he said.

In response to a Stomp media query, the Singapore Civil Defence Force (SCDF) said that they received a request for ambulance assistance at about 8.18pm.

"One person was taken to Tan Tock Seng Hospital," a spokesman said.

Related Stories
Woman suffers deep gash on shin after side panel from escalator at City Hall MRT Station dislodges
Teen gets shoe stuck in escalator at Seletar Mall while going upstairs
Girl whose hair got stuck in escalator wails as distressed dad tries to comfort her
More About:
accident
fall
elderly
escalator
blood