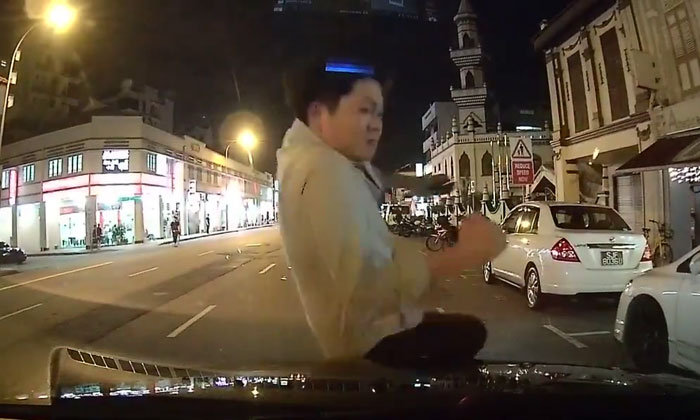 A man was caught on video running against traffic flow and jumping on vehicles.

The video of the bizarre incident was posted on ROADS.sg's Facebook page and a caption by a contributor called Solitary Hunter stated that it occurred along Geylang Road, near Lorongs 30 to 34.

According to the video's timestamp, it happened on June 19 at about 12.22am.

"This guy was running against the flow of traffic trying to kill himself by jumping onto oncoming traffic," the contributor wrote.

In the video, the man is seen running full speed towards a motorcyclist travelling on the road.

When the rider swerves to avoid the man, he then does what looks like a pirouette and continues on his path towards the car recording the video on its car cam instead.

He slows down just as he reaches the vehicle before launching himself onto the car's bonnet and sliding off.

He hits the car with his right hand before he starts running again and does the same thing to a car further down the road.

Throughout the video, another guy dressed in black is seen chasing after the man, presumably to stop him.

The reason for his behaviour is unclear.

According to the post's caption, the contributor who is believed to be the driver of the car with the car cam accuses the man of committing an "apparent insurance scam" and slams him for "causing harm to other motorists".

He added that his car, as well as other vehicles, was "damaged" by the man's antics.

However, he did not share details on said damages.