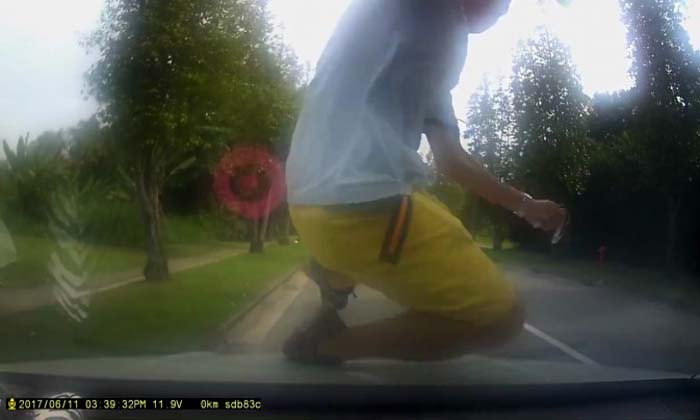 Of all the strange encounters on the road, Facebook user Terry Loo Peng Leong's experience would easily take the cake.

Terry was driving along Pasir Ris Farmway 2 yesterday (June 11) when a man started running towards him from a distance (not unlike an Olympic long-jumper), before throwing his body on the bonnet of Terry's car.

The driver posted two videos of the incident.

Terry had instinctively stopped his car as he saw the man approaching, but the man continued running before jumping onto the car and lying on the bonnet as if he was badly injured.

In response to a Stomp query, the Police said that they were alerted to a case at 3.32pm, of a man believed to be drunk.

"The 35-year-old man was subsequently arrested for rash act," said the Police.

In an interview with The Straits Times, Terry said that the man punched and kicked his car a few times.

When Terry got out of the car to stop him, the man pushed Terry.

Terry also said that the man told him that he was injured and demanded compensation.

He stopped asking for money when Terry pointed to the dashboard camera.

Terry said that he, his son and his daughter, who were also in the car at that time, were unhurt in the incident, but his car's bonnet was dented.