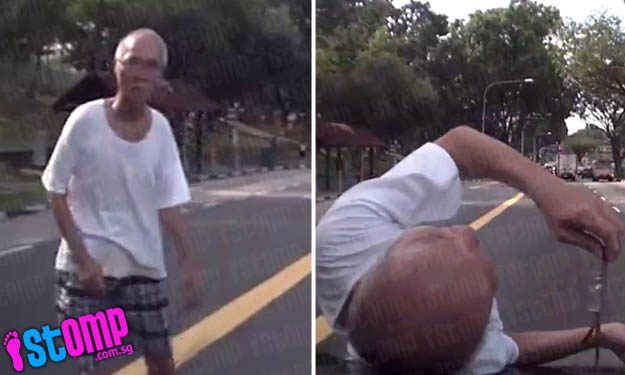 Stomper Adrian slowed his car down for an elderly man standing in the middle of the road yesterday (Apr 8), and was shocked to see the latter fling himself onto his bonnet.

According to the Stomper, this happened yesterday at about 4.55pm along Ang Mo Kio Avenue 6.

In the footage caught by his car's dashboard camera, Adrian slowed down as the man raised his hands and seemed to want to cross the road.

"A man tried to slow my car down by raising his hands as he pretended to cross the road illegally.

"As I slowed down to let him pass, he suddenly jumped onto my front bonnet as if being knocked down!"

This raised alarm as to whether it could have been a fake accident scam -- such cases are rife in China.

The perpetrator would pretend to be injured, claiming that your car has knocked him, then proceed to claim money for insurance.

Adrian then quickly drove away as he did not want to hold up traffic.

However, he noted that the man looked like he was about to try it on another vehicle.