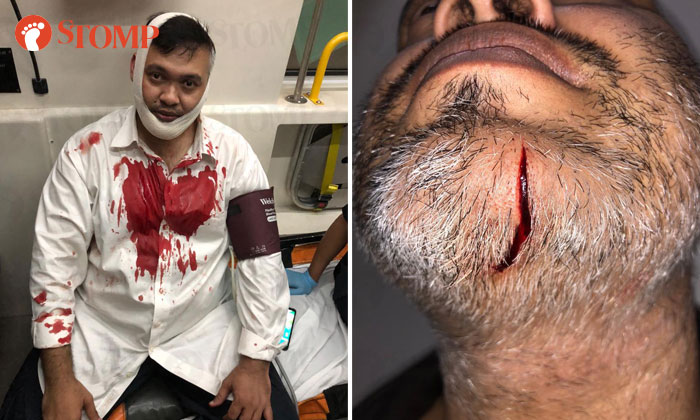 A 34-year-old man was jailed for eight months on Aug 7 for cutting a taxi driver with a knife at Orchard Towers.

Stomper Rohaizat, the cabby, told Stomp that the incident happened in May last year.

It started when Jaikishan Jayaraj, who had been drinking, approached Rohaizat's taxi outside Orchard Towers.

"He knocked on my taxi looking for the driver," the Stomper said.

"I approached the guy and asked him if he wanted a big taxi.

"I told him I'm a taxi driver and this is my taxi.

"He then asked me, 'you want to find trouble with me, is it?'

"He asked me if I'm from the 'east side', I think he thought I was a gangster and asked me again if I wanted to find trouble with him.

"He then took something out and pointed it at my tummy."

Rohaizat said that because he was standing close to Jaikishan, he did not see what he had in his hand.

It was only when Jaikishan walked away that another cabby told him that he had a cut on his stomach and that he was bleeding.

"I then went to find him and found him in another cab.

"I stopped the driver and told him that the man had hurt me and was holding a dangerous weapon.

"When the driver stopped, the fella exited the cab and grabbed me with his left hand and straight away took out a flip knife and pointed it at my neck.

"I got a small cut on my neck before grabbing his hand.

"He twisted it and it kena my chin."

By then a crowd had appeared and Jaikishan fled the scene.

Unaware that his shirt was blood-stained, Rohaizat said he chased Jaikishan to Orchard Road, towards the Thai Embassy.

"He was hit by a yellow taxi and flung onto the road," said Rohaizat.

"When he got up, police officers had arrived and I told them that the man had a knife.

"An officer managed to take the knife out of the man's right pocket and he surrendered."

Rohaizat was later taken to Tan Tock Seng Hospital where he received stitches for his injuries.

According to The New Paper, Jakishan was convicted of one charge of causing hurt with a weapon.

One similar charge was taken into consideration during sentencing.

He could have been jailed for up to seven years, or fined, or caned, or with any combination of such punishments.