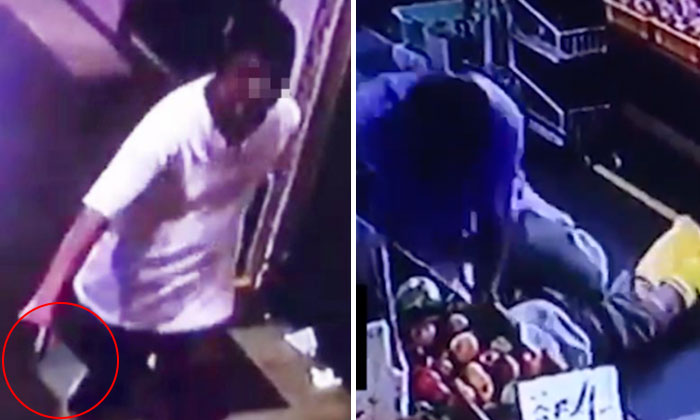 A chicken stall owner holding a chopper charged at a man from a fruit stall during a dispute in a market at 44 Holland Drive at about 11am on Tuesday (May 15).

The fruit stall owner threw a chair at the chicken stall owner in self-defence and managed to restrain him.

The fruit stall owner, Mr Deng, 57, told Shin Min Daily News that he and the 48-year-old chicken stall owner have known each other for over 20 years.

Mr Deng said that he also owns another vegetable stall and the chicken stall owner would help him to deliver the vegetables from that stall to a restaurant along Bukit Timah.

Mr Deng alleged that their friendship could have soured over an issue with the transportation of the vegetables.

He claimed that the chicken stall owner’s sister had felt that the vegetables were too heavy, and told her brother not to transport them anymore.

“Things between us were still normal then, but he suddenly came to my stall at around 10am and started shouting at me.

“I ignored him and went on with my own business.

“When I came out from the toilet, I saw that he was holding a chopper and waiting in front of my stall for me!”

Mr Deng said that the chicken stall owner charged at him upon spotting him exiting the toilet, and the incident was captured by surveillance cameras.

“I grabbed a chair and threw it at him.

“Later I managed to pin him to the ground.

“Four or five of the aunties in the area also came to help me, and we disarmed him.”

“After the incident, my children were especially worried.

“We’ve known each other for so many years.

"Maybe he was a little drunk from the previous day.

"I will still forgive him and not avoid him."

In response to media queries, the police said they were alerted to a case of criminal intimidation at 11.40am on May 15.

A 48-year-old man was arrested, and police investigations are ongoing.

Related Stories
Women in dispute outside ICA Building, one refuses to let go of the other even when police arrive
Man hurls vulgarities and points middle fingers at guy during dispute at Punggol MRT Station
Man arrested after Chinatown dispute: He was chased by police, tried hitting officer with glass bottle
More About:
dispute
knife
argument
Holland Drive